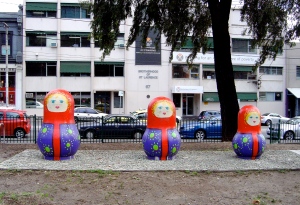 The Russian Matryoshka Dolls sculpture by Bronwen Gray in the garden of the housing commission flats were the first public sculpture that I can remember seeing in the area. (Actually they were made 2001/2. See postscript.) They add a bright bit of colour and fun to an otherwise gloomy area.

Mosaics appear to be a popular choice for public art along Brunswick St. There are two mosaic murals on the sides of the public housing commission blocks (90 and 140 Brunswick St). And several mosaics laid into sidewalk. Many of the sidewalk mosaics are in now in bad repair, with many missing tiles, especially Simon Normand’s “Gondwanaland”. There doesn’t seem to be any plan to maintain these works of public art.

These ceramic works are influenced by the art of Mirka Mora both in the choice of materials and the symbolist imagery in a naïve style with bright colours. This is especially evident in the images in Christine Parks’ untitled mosaic (1992) and Giuseppe Roneri’s 3 mosaic benches (1992). There are two on the corner of Victoria St. and one on the corner of Westgarth St. These sculptural benches are popular with the many people walking and socializing along the street. There is another bench near Leicester St. made of wood and iron cut in a floral pattern with the words “Shine On Me” on the centre of the back. The bench is one of three pieces made by Bronwyn Snow and installed in 1992 (please see Bronwyn’s Snow’s comment for more information on the pieces).

Although it was paid for in 1992 with the same Federal Government fund along with most of the other art that I have mentioned, Peter Corlett statue ‘Mr Poetry’ was not completed until 1993. When Peter Corlett made the statue it was not memorial, it has now become one, with the addition of another larger bronze plaque dedicated to the model Adrian Rawlins (1939-2001).

At Kerr St. there is a weird sculptural thing of uncertain origins (probably part of the 1992 funding but the bronze plaque has gone from the sidewalk). It looks like the child gothic revival and funk, made of iron and rough concrete (with more mosaic elements) with a copper UFO on top.

Another sculptural oddity are the two metal bicycle rakes on Westgarth St. with a tricycle and a reference to the penny farthing welded into their frames. 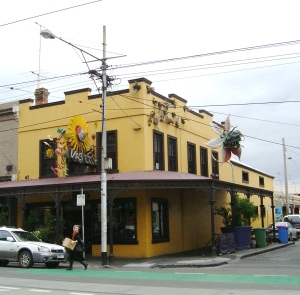 A unique sculptural feature of Brunswick St art the decorative excentric sculptural signs above many of the shops add a boho look to the 19th century eclectic stye architecture. “Heading Out Hair & Beauty” has a large mosaic head in profile with a single glass earring. “Flowers Vasette” has a range of sculptural elements along its roofline including bees and giant flowers. There is an angel holding a tray above “Sweet Temptations” At a picture framers there is a giant frame, a giant plate above a restaurant and an eccentric dragons above Polyester Books and Polyster Records.

“Hi Mark, I created the sculptures in 2001/02. I had been working at Atherton gardens as the artists in residence for about six months, working with the tenants on a series of mosaic murals. (the 2 murals that are located on the buildings 90 and 140 brunswick st)The housing estates can be such harsh places and I started to ask myself why is it so hard for people to nurture each other here? to see themselves as a family, to take care of each other.

I also wanted to create a sculpture that spoke not only to the residents but to the surrounding community, to remind them about the humanness of the estate and to encourage them to find a way to include the estate into their landscape.

The idea of Babushka seemed fitting, to create structures that worked against the angular and masculine feel of the buildings, and that worked on a scale that was human and not overwhelming. Although not intentional the structures also turned out to be the exact size of my own three girls at that time, so they hold personal meaning for me as a mother, to remind me what nurturing is for me.

Again not intentional, the 3 structures, each of which is repeated but on a smaller scale, were installed at the time when the estate turned 30 years old. It seems fitting that at this time, in some of the flats we now have 3 generations of families living together, so there are times when I ask myself what over the 3 generations has changed.

I love the fact that I often see children playing on the dolls, that they are sturdy and strong enough to support the play, and that I have seen tours of Japanese tourists stop to have their photos taken with them – on a site that just a few years earlier was known as one of the roughest and most dangerous parts of the estate!

It was my great pleasure to work with the residents for a period of 3 years, so see them embrace their creativity and to include me as part of their family.”