Thinking globally and acting locally I have a few notes about street art in Iran, photographs of the East Richmond railway station and news about the Melbourne Stencil Festival. Street art is a global art movement; it is also a political and technological art movement. The digital camera and the global connectivity of the internet have had a major impact in recording, distributing and promoting street art.

“I am Raha Kootah. I contribute to Kolashtudio.com – Iranian underground art Media and Basement and Do Art as my favor. I love Iran and Iranian culture with Peace, Democracy and passion.”

I have been trying to find out more about what is happening with street art in Iran with the protests after the recent elections. It is difficult as Iranian graffiti sites are mostly for those, unlike me, who are literate enough to read Arabic. A good place to start is Kolah Studios. 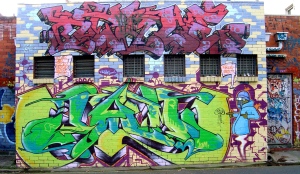 Back in Melbourne I have been photographing street art at East Richmond railway station carpark and the surrounding streets. There is a lot of good street art that adds color and interest to an otherwise drab and decaying environment of brick and corrugated iron. Most of this is legal; a few shops, like the butchers have used street art for advertising, a few houses have decorated their walls and their fences. There are some works by notable street artists like MIC faces and Shime.

I am now the secretary of the Melbourne Stencil Festival; I have taken over from Satta Van Daal who has resigned from the committee. It is a volunteer position; the festival is entirely staffed by volunteers. Last year I was the volunteer coordinator for the Melbourne Stencil Festival, this year I wanted to be more involved. I am involved because I want to be a responsible art critic, by that I mean being involved in the arts, thinking globally and acting locally, to experience the reality and not only write about it. (I have noted my involvement in my biography page and I will try to avoid conflicts of interest if I do write anything about the festival in this blog – I may just be writing about it on the festival website.)