I walked around a corner and a little boy pointed at me and said: “Look mummy, a gangster.” I was dressed in all black with a black overcoat – I hadn’t realized until then that I was wearing gangster drag. I live in part of Melbourne that is central to Melbourne’s gangland war but I never thought that I was part of it. But, the cultural influences of Melbourne’s gangsters are all around me. It is rumoured locally that the house behind mine was part of the gangster Tony Mokbel’s assets. All I know for certain was that they had a large dog in the backyard. It was auctioned late last year and the interior was decorated in the worst possible neo-rococo taste.

Melbourne’s gangland is more than just crime and corruption of police and politicians, like former Shadow Federal Attorney-General Kelvin Thomson, my local MP, who gave a reference to Tony Mokbel in 2000. Thomson  wrote that Mokbel  had made “significant contribution to the community” and had “unblemished conduct”.

Melbourne’s gangland is also an aesthetic and cultural influence, creating some excellent crime TV series, most recently Underbelly, and crime movies. True crime authors Andrew Rule and John Silvester wrote the Leadbelly series of books based on their journalist experience of the gangland. Geoffrey Wright’s 2006 movie of Macbeth has a design influenced by Melbourne’s gangland that contributed to a great interpretation of the script. I haven’t read any of celebrity criminal Mark ‘Chopper’ Read’s books but I have seen his inimitable foray into visual arts along with the variety of signed axes for sale in a Collingwood shop. ‘Chopper’ Read uses the theatre and showmanship to build on his own publicity. 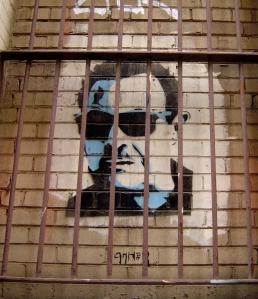 HaHa’s series of repeated stencil portraits Condello is appropriately placed behind bars in Hosier Lane.  HaHa is also well known for his stencil portrait of the Australian colonial bushranger Ned Kelly. There were images of Al Pacino from Scarface trackside along the Upfield line. These gangster images work well in b&w high contrast and so a perfect for single colour stencils.

Writer, independent researcher and artist, Mark Holsworth is the author of the book Sculptures of Melbourne. END_OF_DOCUMENT_TOKEN_TO_BE_REPLACED
This entry was posted on Thursday, August 6th, 2009 at 12:52 AM and tagged with ‘Chopper’ Read, gangsters, HaHa, Kelvin Thomson, stencil art and posted in Culture Notes. You can follow any responses to this entry through the RSS 2.0 feed.
« Art Zombies
More Street Art Exhibitions »

One response to “Gangster Aesthetics”