Copenhagen has the Little Mermaid statue, Brussels has the Manikin Pis but what public sculpture symbolizes Melbourne? These statues become the mascot of the city and have been the focus of tourist’s attentions long before cameras. Many like the owl of Dijon have been rubbed smooth and featureless by human hands. Melbourne does not have such a sculpture because there have been so few public sculptures in the CBD. In 2006 The Age reported about a revival of public sculpture in the city 25 years after the controversy over Ron Robertson-Swann’s “Vault” in the city square. It appears that Melbourne City Council’s fear of the controversy has retarded the development of the city’s image. 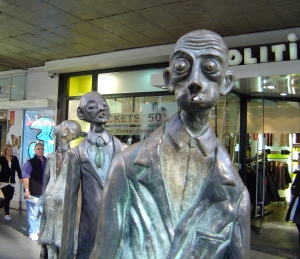 The most likely current candidate for the statue mascot of Melbourne is the “Three businessmen who brought their own lunch; Batman Swanston and Hoddle”. It is one of Melbourne’s most popular sculptures and most photographed statue. It is on the corner of the Burke St. mall and Swanston walk. It was unveiled in 1994 as a “gift of the people and government of Nauru.” There is no mention on the plaque as to who the artist are; it was made by Melbourne sculptors, Alison Weaver and Paul Quinn. The public enjoy interacting with these thin, life-sized figures. The figures free hands are polished as the public hold hands with them. The public frequently augments the 3rd figure, “Hoddle” with a cigarette added to his pursed lips. (Perhaps Alison Weaver was thinking about this augmentation when she made a later sculpture “I’m Always Worried” out of cigarette butts.) 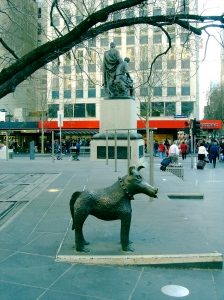 Another popular potential mascot statue is Pam Irving’s bronze dog, “Larry Latrobe”, in City Square. Like the Little Mermaid or the Manikin Pis these statues have a popular and sentimental appeal, they are frequently augmented by the public, but are not admired for their artistry. Although these statues become, through their popularity, symbols of the city they are not representative or symbolic of the city, not like Armstrong’s 25-metre-high “Eagle” in Wurundjeri Way that represents the demiurge creator from the stories of the Wurundjeri, the local aboriginal people. 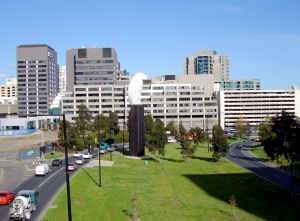 One of Melbourne’s most recent public sculptures is on Buston Reserve. Susan Hewitt and Penelope Lee’s “Great Petition” 2008 is a great white furl of a dynamic ribbon representing and commemorating the 1891 Women’s suffrage petition. The sculpture is intersected with a path; allowing the public to move through the sculpture. Along with the sculpture there is a didactic panel by Prof. Marilyn Lake to explain the history of women’s suffrage in Victoria. As political art this is hardly a controversial subject, it is long overdue recognition. As a sculpture it will never be popular but it is beautiful.

There are still a few 19th Century bronze sculptures around Parliament. I think that the public would prefer a figure on a plinth over a modern sculpture but there could no agreement now about who. The “Great Petition” is a democratic image rather than an idol and like democracy will not be as popular as the image of a demagogue.

For me, the strangely positioned statute in the city is Paul Blizzard’s “Fossil Stones” 1998 outside the Dept. of Justice, the commission was supported by the Emerging Sculptors Trust. The bronze faux fossils are set into local volcanic rocks are geologically inaccurate, as fossils are found in sedimentary rocks. It is also an odd choice of sculpture for the front of the Dept. of Justice – are they really a bunch of old fossils? 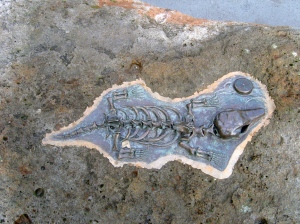 Writer, independent researcher and artist, Mark Holsworth is the author of the book Sculptures of Melbourne. END_OF_DOCUMENT_TOKEN_TO_BE_REPLACED
This entry was posted on Monday, August 17th, 2009 at 7:36 AM and tagged with Melbourne CBD, Nauru, Public Sculpture, sculpture and posted in Culture Notes, Public Sculpture. You can follow any responses to this entry through the RSS 2.0 feed.
« @ Kings ARI
Exhibitions @ RMIT »