Readers may be aware from my last two entries that I have just returned from Brisbane, or Brizvegas as it is called. “Brizvegas” was first used in print in a 1996 edition of the Courier Mail in reference to the opening of the new casino and the popularization of poker machines in Brisbane’s bars and clubs. The commercial sex of Fortitude Valley sits alongside the art galleries, bars, cafes and discount clothing stores.

I only go to Brisbane, Queensland when accompanying my wife, Catherine to her conferences. When she at her conference I fill in the day looking at art and photographing street art. There is not a lot of joy for a tourist interested in art in Brisbane. You could fill in a day if you went to all the major galleries on the South Bank. If you were really determined and wanted to see galleries for a second day, you could see all the galleries in Fortitude Valley along with the street art. Catch a train to South Bank station and see the gallery at Queensland College of Arts (QCA) and walk across the Goodwill footbridge across the river to the Queensland University of Technology Art Gallery. I was fortunate – at the QCA Gallery there was an exhibition of Juan Davila’s work on paper – Graphic!. I managed to stretch this out to three days by repeat trips to GoMA and looking at the exhibitions at the Queensland Centre for Photography and Jan Manton Art. 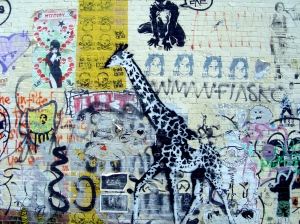 The street art in Brisbane is mostly in Fortitude Valley and mostly in the form of stickers. There are stickers on the back of every street sign along the street. Stencil art is still strong in Brisbane’s street art scene and I recognized several artists, Mzcry and ZKLR from my work with the Melbourne Stencil Festival.

I had dinner in the West End with my old housemate Ben. Ben recommended dinner at the 3 Monkey’s. Ben had the lasagne, Catherine had the haloumi platter with pita bread and Greek salad, and I had a gourmet pizza. Ben and I both had a slice of cake for desert. Looking back it was amongst the best food that I had in Brisbane. The food on the South Bank was mostly over priced rubbish in small portions. Surprisingly the other good food was at the conference dinner. It was very good but not as good as the after dinner speech by writer Nick Earls. He was excellent and the perfect dinner speaker for a conference of medical librarians from around the world. 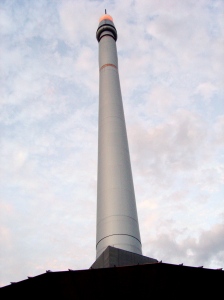 But I digress and I want to return to Brisbane’s West End. Brisbane is a small city where a flamboyant hairdresser can still make a big impact. Stefan’s Skyneedle is the largest gay erection in Brisvegas – a piece of fantastic, pointless architecture in Brisbane’s West End. At night the globe flashes with light, multi-coloured fluorescent tubes make patterns and spotlights span the sky – it is quite a show. The Skyneedle is an 88m tower that was constructed for the World Expo ’88. At the end of Expo’88 hairdresser Stefan Ackerie bought the Skyneedle and moved it to his company’s headquarters in the West End. It had another sculpture in the car park when I visited.  Massive blocks of unfinished white marble form the plinth for a marble Janus eyes, that looks both ways. 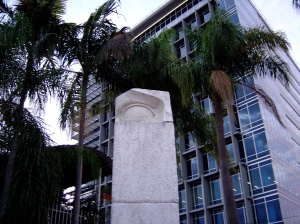 The base around the Skyneedle is derelict. There are improvised stairs going up to its tiled hexagon base. Underneath the brass awning/collar is a wooden box painted silver enclosing the base of the tower with a locked door. The light show must be on automatic, as it didn’t look like the door was unlocked frequently. 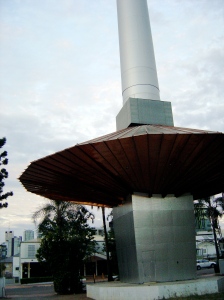 Brisvegas appears like a left-over; a left-over from the expo, the capital city of a former tropical fascist state on the mend, a work in progress with footpaths closed for building works. However, I did also see some great new public libraries in Brisbane with beautiful architectural design, so there is reason to hope for Brisvegas.