Melbourne has been in drought for years and although this has made many physical changes (like rainwater tanks in backyards). There are water restrictions in place (but rarely enforced), water rates have increased, and there is public awareness advertising about water saving on television. These have made the drought present in some of the public’s mind. Old ladies are using buckets to empty their bathwater on their flower gardens. However I have seen very little art about the drought or water conservation in that time (and regular readers of this blog will know that I see a lot of art in a variety of galleries).

There have been innumerable works of art this year with references to bushfires and not enough about the drought and bigger environmental issues. Bushfires of Australia are so dramatic that they tempt both artists and writers. The drought is slow, it is not dramatic; Melbourne’s dams go down, plants slowly die and the land dries up. For all their claims it appears that contemporary artists are as shallow as Melbourne’s current dam levels and that street artists are far deeper thinkers, perhaps because street art is more political.

Street artists appear to be the most aware of the more serious problem but even then the references are oblique. At Brunswick train station there is a 2 colour stencil with a political slogan: “rainforest = rain”. The word “rain” in both words is emphasised in blue the connection between rain and rainforests. And last year Aerosol Arabic and local artists made a large mural in the city: Thirst for Change. But even Aerosol Arabic only referred to water conservation rather than the drought.

The Plumbing Industry Climate Action Centre on Albert St. in Brunswick has used their own wall by the railway line for a bit of street art inspired propaganda. 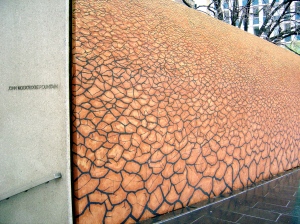 Melbourne’s fountains and surrounding sculpture have suffered from the drought. In the city square the John Mockridge Fountain has been boarded up and the wooded boards painted (by Ash Keating, see comment) with an image of cracked mud (painting by Ash Keating, see comment). And without water in the pond at the Carlton Recreation Reserve on Royal Parade, the sculpture of the figure and ducks in the ornamental pond, really doesn’t work.

I am currently using 61 litres of water a day. Should I discuss my new toilet at this point, with the hand-basin that refills the cistern?

Writer, independent researcher and artist, Mark Holsworth is the author of the book Sculptures of Melbourne. END_OF_DOCUMENT_TOKEN_TO_BE_REPLACED
This entry was posted on Monday, September 21st, 2009 at 5:44 AM and tagged with drought, fountains, water conservation and posted in Art Galleries & Exhibitions, Culture Notes, Street Art. You can follow any responses to this entry through the RSS 2.0 feed.
« Jason Wing Street Spirit
Melbourne Stencil Festival Opening Night »

One response to “The Drought & Art”