First off I have a major conflict of interest in this story because I am the secretary of the Melbourne Stencil Festival. And as the secretary I have a warped and biased perspective mixed with exhaustion. I don’t want to be spruiking for the festival or telling the inside story. 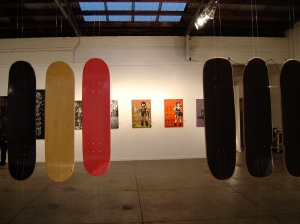 I could try and report the facts: the winners, the speeches, how many people attended but I didn’t take notes. I know from the door prize raffle that there were over 200 people through the door before the speeches started. I don’t want to make my own speech here. I introduced all the speakers last night: the curator Tessa Yee, the Mayor of the City of Yarra Amanda Stone, Stencil Festival President Phil Hall and the representative from the judging panel Craig Kenny. Craig Kenny announced the award winners:

Boo “Our Lade of the Transparency”

I can’t remember all the details. I did take my camera, so here are a few photographs.

I hope that I will be able to write more about the stencil festival when I recover.