Defenders of graffiti often point at the visual pollution of advertising, arguing that only economics separates the two and that graffiti if often more aesthetic than advertising.

Increasingly advertising campaigns are using graffiti as part of their campaign. In 2007 there were stencils advertising for the Borat movie in Lt. LaTrobe St, in Richmond and in Centre Place. The publicists for the Borat movie thought that they could grab some hip free space but were greatly mistaken. Their ad was quickly covered up with “No Ad” in marker pen and “John Howard killed the Glasshouse” in a purple and yellow stencil. This zone of “extreme tolerance” towards graffiti is not going to tolerate the invasion of advertising. The advertising dollar might rule in the rest of the world but its images will be resisted in temporarily autonomous zones.

Well, that is the idealistic version but some advertising does sneak through. The first stencil graffiti that I saw in Melbourne was the 1984 publicity campaign for the movie, Dogs in Space. That publicity campaign was a copy of the graffiti publicity campaigns that bands had used earlier (there is the notable use of stencil images from Crass and Black Flags).

Fly-posting of posters is just as illegal as paste-ups/wheat-pasting but because they are advertising they are tolerated more than art – there aren’t organizations against fly-posting but there are anti-graffiti organizations. The poster gangs of Melbourne quickly paste over any material that encroaches on their territory. The current use of chalk stencil advertising on footpaths is just as illegal as fly posting and graffiti. It has been used increasingly in 2009 to advertise universities, soft drinks, the Dali exhibitions, plays and awareness of sexually transmitted diseases. 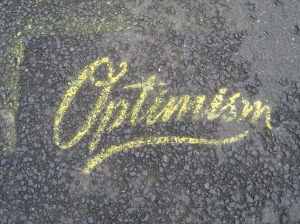 Advertising for the play "Optimism"

The street artists are advertising themselves in their work, the signature tags write large. In 2007 there were lot of myspace addresses amongst the art in Hosier Lane. And, in the case of legit legal works the image will advertise business that commissioned the work and supplied the paint. Street art has always been a form of alternative advertising. Jason Dax Woodward points out that “the standard size of a billboard is much like that of the side of a train.” (Woodward, How to read Graffiti , p.12)