Nobody seems to mention the old sgraffiti technique of writing in wet cement as a form of street art. This is because mostly it is just names, expressions of love or football mania or the accidental evidence of bicycles, cats, dogs and bird prints. Why isn’t it considered part of street art, like tagging? Maybe someday someone will do something artistic with the media but most of it is just rubbish. It lacks what all art and decoration must have, an appeal or meaning to someone else besides the maker. 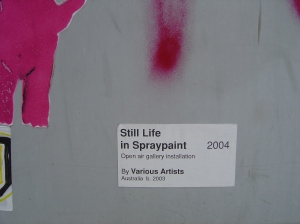 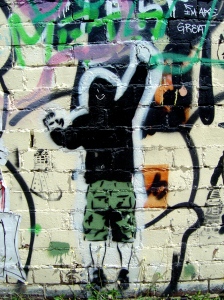 Some graffiti is so conscious of its position as an underground art world. Graffiti that is aware that it will be photographed and stored in a jpg format file.

This street art appears is so ready for critical essays about culture as it comments on its own position in the art world.