Although public sculptures are generally intended for a specific location they are sometimes moved due to changes to the usage of the site. Melbourne has a number of major sculptures that have moved due to the taste of adminstrators. Melbourne’s moving sculptures include, “Angel” and “Vault”, the orphans of the 80s who are without a permanent home. “Angel” by Deborah Halpern originally stood in front of the NGV on St. Kilda Road before it was moved to, Birrarung Marr, on the banks of the Yarra River in 2006. There was no controversy over the sculpture or the move unlike Ron Robertson-Swann’s “Vault”.

Ron Robertson-Swann’s “Vault” is currently in its third location; originally commission for the city square, and installed in May 1980. “Vault” was controversial, many people in Melbourne had a avoided any kind of modern sculpture and in reference to Australian xenophobia the foreign modernist sculpture was nicknamed “The Yellow Peril”. Melbourne City Council quickly caved into the critics and less than a year later, in 1981 Vault was exiled to Batman Park the banks of the Yarra, then a forgotten area of the city before the casino was constructed on the opposite side of the river. After the casino was constructed, in 2002, “Vault” was moved to its present location in the aesthetic preserve near ACCA. The people of Brisbane appear to have no problems with their Ron Robertson-Swann statue “Leviathan Play” 1985. Maybe it is the color but more likely it is the location outside the art gallery.

(This part of the entry was inspired by comments by Shifty MacDougal on my blog entry on Melbourne’s Public Sculpture. Thanks Shifty.) 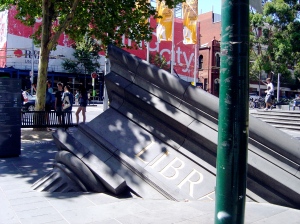 The State Library forecourt has several other statues following the classical tradition of heroic statues: “St. George and the Dragon” by Sir J.E. Boehm and “Jeanne D’Arc” by E. Fremiet. These bronze editions of 19th Century heroes belong to another era; they were imported to Melbourne with the aspiration of giving the public inspiring art that would morally improve them. This is not the aim of most contemporary public sculpture. 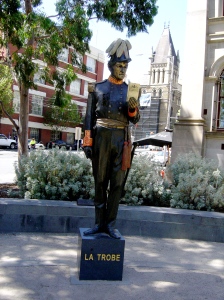 I couldn’t find the name of the artist who made the statue of Sir Redman Barry, in the State Library forecourt, on the plinth’s panel amidst the all the many words about the subject and the commission. It was made by James Gilbert in England and finished by Percival Ball in Australia.

At least, the artist, Peter Corlett, has not been neglected mention in the panel about the statue of Governor La Trobe. The bronze statue has some colour to parts of its finish, a feature that would have been seen as retrograde by Hegel. It is not the colours on the statue that concern me but the very small plinth that makes La Trobe look like an eccentric soapbox orator. Peter Corlett has numerous other figurative, bronze, public sculptures around Melbourne.