Corporate Sculpture in the CBD

Most of the contemporary and modern sculpture in Melbourne’s CBD is not public sculpture it is owned by the corporation that owns the building. The sculptures out the front office buildings are often very high quality by notable artists. Modern architecture needs sculpture in forecourts and foyers to humanize the austere geometry. So while the City of Melbourne was avoiding installing public sculpture for most of the 20th century the business sector was not. These sculptures don’t attract much attention. They are ignored (in a way that public sculpture is not), there are no public controversies over them because they were not paid for public money even though they are on public show.

In front of the CML Building on Elizabeth St. is “Children’s Tree” 1963, a bronze sculpture by Tom Bass. The plinth of this statue has been designed as public seating and is very popular. This whimsical sculpture has a boy and girl playing around stylized tree with an owl, a subtle allegory of wisdom through play. It is part of an era when conservative Melbourne avoided abstract art but its whimsical style is again in fashion.

At the front of 200 Queen Street is a large bronze sculpture by Andrew Rogers “Rhythms of the Metropolis” 1996, a very futurist title and sculpture. The rhythmic energy of the city was celebrated by futurism. This sculpture is not representative of Roger’s style. Andrew Rogers is now internationally known for his very large geo-glyph land art around the world. 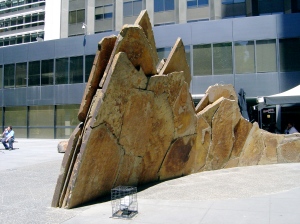 There is a small collection of contemporary sculptures in the courtyard of 360 Collins Street that faces Lt. Collins St. It is worth a look for the variety of styles and techniques represented in the small collection. There is no information about these sculptures in the courtyard; hopefully someone will fill me in. There are sculptures  by Paul Blizzard, his father the late Peter Blizzard and New Zealand sculptor Chris Booth.  The tall sculpture is Peter Blizzard’s Shrine to The Ancient River, 2000.

I have been looking more closely at Paul Blizzard’s familiar bronze fossils set in stone. They frequently include an anachronistic inconsistency; there is the bicycle tire print across the snake skeleton and a small padlock with a bird skeleton. These anachronisms and other inconsistencies, such as mounting the bronze ‘fossils’ in volcanic igneous rather than a fossil bearing sedimentary rock, are part of the charm of the work. Paul Blizzard added artistic details to the rocks that he wished were there, even though that would be impossible.

And this is just a few of the sculptures out the front of buildings in the CBD – I would be interested in exploring corporate art collections further if I could get further access and information.