Loretta Quinn “Within Three Worlds” 1995 in memory of Angela Jane Esdaile (1969 – 1993) was located by a pond at the north end of Princes Park in Princes Hill, near the intersection of Royal Parade and Park St. It is has gone now; I haven’t been able to find out any more information, so I assume that it has not been stolen but removed by city council. If anyone knows the reason for its removal please leave a comment. (So much for my assumptions, it was stolen. See Lorretta Quinn’s comment for more details.) 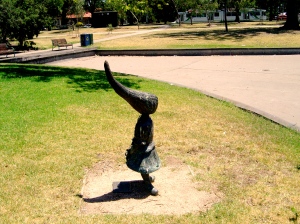 This whimsical bronze sculpture of a little girl with her hair blown back is typical of Quinn’s sculpture that frequently feature children. The little girl was once looking at three metal boats that were earlier removed from the now empty pond. The pond being empty due Melbourne’s long running drought and subsequent water shortages. The sculpture was paid for by Angela’s family and commemorates the contribution to the community of childcare workers like Angela.

I was going to write a longer entry about the whimsical little statues in some of Melbourne’s gardens but since this statue has now gone I thought that I should post this short entry as a reminder.

P.S. Within Three Worlds has been restored.

Writer, independent researcher and artist, Mark Holsworth is the author of the book Sculptures of Melbourne. END_OF_DOCUMENT_TOKEN_TO_BE_REPLACED
This entry was posted on Monday, May 10th, 2010 at 12:19 AM and tagged with childcare workers, Loretta Quinn, Princes Gardens, Princes Hill, statue and posted in Public Sculpture. You can follow any responses to this entry through the RSS 2.0 feed.
« Gustave Moreau Museum
Coburg 2010 »