This is not the insides story of the Melbourne Stencil Festival 2009, I haven’t got time for that, not with the Sweet Streets festival about to start. But briefly, after the entire previous committee resigned and imploded the Melbourne Stencil Festival 2009 was run by a small emergency committee that included Phil Hall, Tessa Yee, Anna Briers and myself.  We put the festival together in three months with almost no budget and only in-kind support from sponsors. It needs to be said to dispel any idea that it was being run by paid administers in an office with lots of sponsorship dollars. After managing to put together a festival last year the new committee became even more ambitious for the 2010 festival.

This year the festival is called Sweet Streets and it is bigger and better than in previous years. It is now a real arts festival with a program of events and multiple exhibitions with multiple curators in several locations in Melbourne, Fitzroy, Collingwood and Abbotsford.

There was an obvious need to re-brand and redefine the Melbourne Stencil Festival this year to include more than just stencil art. The festival’s initial focus on stencil art came in 2004 at a time in Melbourne when stencil art was very popular and there were a lot of stencil art on the street. Since then street art in Melbourne has expanded, new techniques and ideas have come along like yarn bombing and street sculpture. So the Melbourne Stencil Festival became Sweet Streets – a festival of urban & street art. The use of the subtitle “urban & street art” was used to sidestep the debate about street art in the gallery (see my entry about this debate).

My role as the secretary for the festival is not the most glamorous of jobs – lots of emails, typing minutes of meetings, organizing meetings, finding meeting venues and other mundane or bureaucratic matters. On a more interesting note I have been organizing a night of short films at the festival hub, 1000 Pound Bend, 361 Ltl. Londsdale St. on Thursday 14th October. There have been so many documentaries made or are currently being about Melbourne’s street art scene. My selection of films is aimed at showing the diversity of approaches and voices. 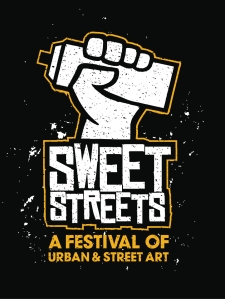