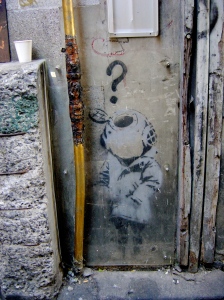 Trying to take a bash at a brief history of art post 1984 when Danto wrote his essay “The End of Art”to the present. Read Arthur C. Danto The Philosophical Disenfranchisement of Art (Columbia University Press, 1986). The pendulum of fashion swings between decades; it is kept moving by a variety of forces from the sheer perversity of artists’ efforts to the gravity of the needs that the extremes of the fashion have ignored. It is not surprising that street art, whimsical illustrations and small collectable artwork have become the current fashion after the large institutional art of the late 1980s.

Comparing two popular artists Jeff Koons and Banksy demonstrate some of the differences between these two eras. Both Koons and Banksy are popular artists who employed a prankster personality to promote a sentimental image based art. Behind their pranks and their images both are commenting about society, its values and its morals. Yet the differences between their two decades are enormous from the New York art world of the 1980s to a British internet and street-art phenomena.

Jeff Koons – “ I want communicate to as wide a mass a possible. And the way to communicate with the public right now is through TV and advertising. The art world is not effective right now.”

Banksy  – “The thing I hate the most about advertising is that it attracts all the bright, creative and ambitious young people, leaving us mainly with the slow and self-obsessed to become our artists. Modern art is a disaster area. Never in the field of human history has so much been used by so many to say so little.”

Part of the difference is that the popular media has changed from mass media to the internet. Koons specialized in magazines, posters and TV documentaries. On the internet Banksy dominated exploiting the anonymity and publicity that it provided. Eventually the establishment could not ignore the extent of Banksy’s fan base and the sales figures for his art.

The art of both Banksy and Koons exists in a wide price range, from relatively inexpensive works to beyond what any of us can afford. Jeff Koons marketed to art galleries and art collectors whereas Banksy’s market was neither of these and his prices were initially significantly lower. Koons worked within the contemporary art world and created spectacular art for the major art galleries, like “Puppy”, at the Bilbao Guggenheim. Banksy gave his art to the public on the street and it was the ordinary public that started to buy his art. Now some city councils are trying to preserve what they initially thought that they didn’t want.

Due to the differences between their markets there is a difference in the content Koons and Banksy’s art. Koons’s art generated some controversy with his plagiarism/appropriation of popular images and his sexual images. Banksy is far more subversive and his art has been described as vandalism and his images attacked the image of the police, the Israeli West Bank wall and art galleries. He is the anarchist rat, the criminal artist. The irony and confidence of the late 20th century has been replaced by an increasing feeling of doom and rebellion in the first decade of the 21st century.

Writer, independent researcher and artist, Mark Holsworth is the author of the book Sculptures of Melbourne. END_OF_DOCUMENT_TOKEN_TO_BE_REPLACED
This entry was posted on Monday, January 3rd, 2011 at 8:02 PM and tagged with Arthur Danto, Banksy, Jeff Koons and posted in Art History. You can follow any responses to this entry through the RSS 2.0 feed.
« Brunswick Street Art Slideshow
Chilling Effect Continues »

5 responses to “Koons to Banksy”