Paul, the vandal has been busy again with a spray-can again around Brunswick frenetically scribbling across street art and writing some nasty rude words on pieces. Paul is clearly a malicious vandal unlike the people whose work he is vandalizing. (I wrote about AWOL’s response to Paul’s vandalism in Vandalism @ Brunswick Station) 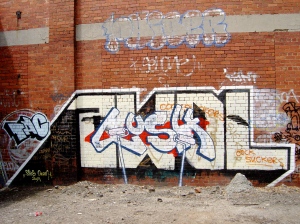 Now I don’t want to give this, or any other, vandal publicity but I do want to use this, and other examples, to demonstrate differences in vandalism. There is a clear difference between malicious and non-malicious vandalism that is not recognized in Australian law. Malicious vandalism is the opposite of benevolent vandalism, like the street art. Street art could be described in these terms as ‘benevolent vandalism’, or, ‘egocentric vandalism’ (that would describe tagging). Street art is clearly not malicious vandalism as there is no intention to destroy or other malice. Finally, there is self-righteous vandalism when the vandal seriously believes that the vandalism is morally/religiously justified (historically associated with iconoclasts). For example, when in 2007 Liberal MLA Steve Pratt stupidly vandalized/buffed street art he believed that he was morally justified and was unaware that the Edison Park Disc Golf Club commissioned the art.

When Heather B. Swann’s “Gates of Hell” was vandalised at the end of 2007. Melbourne City Council described it being “maliciously vandalised”. I was impressed with the Council’s use of language explaining the absence of the sculpture but in not distinguishing between malicious and non-malicious vandalism in street art they are hypocritical. (“Gates of Hell” was an excellent sculptural installation in Degraves Place part of that years’ City of Melbourne’s laneway project. The black subterranean arch was filled with barking black dogs, Cerberus and more; it fitted in perfectly into the architecture of the building whose wall it occupies, an excellent site-specific work to encounter coming up from the underground.)

Writer, independent researcher and artist, Mark Holsworth is the author of the book Sculptures of Melbourne. END_OF_DOCUMENT_TOKEN_TO_BE_REPLACED
This entry was posted on Saturday, February 5th, 2011 at 5:13 PM and tagged with Brunswick, Steve Pratt MLA, tagging, vandalism and posted in Culture Notes, Street Art. You can follow any responses to this entry through the RSS 2.0 feed.
« Sculpture @ Coburg Lake Reserve
Australian Tapestry Workshop »