I have been bicycle riding around Brunswick with Spencer (Spud Rokk), exploring the back alleys, keeping our eyes open, eating apples from a branch over hanging a lane and just looking around. Know your neighbourhood. We looked at a lot of street art; there are some great large paste-ups on the streets and lanes of Brunswick. Other aspects of street art, like paste-ups and yarn bombing, have overtaken the era of the stencil graffiti. There is still plenty of old school aerosol art going on in Brunswick. 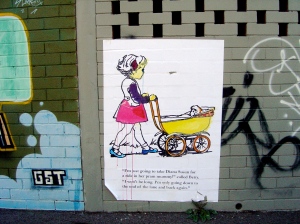 Along the ride Spencer was distributing his CD with dead drop distribution; placing the sticky backed package with the CD in various locations around the street. He reaches up as high as he can to place them on the back of signs. The CDs has music from Spencer’s hip-hop band, the Po Movement (technically I am a member of this band because I have done a couple of synth tracks for them – not featured on the current CD).

I thought that dead drops were only for spies but there are others distributing material this way. Dead drops embed USB drives in walls around the world for anonymous peer-to-peer file sharing. According to the Dead Drops website there is meant to be a dead drop Dorset Rd. Boronia near the long wall. Older and on a larger level Book Crossing leaves books around for people to find in an international literary scavenger hunt. All these dead drops are a form of anonymous peer-to-peer sharing.

Street art is getting stranger, the perimeter of street art is getting broader, a wider circle of possible activity. In the theoretical centre of this model are the hardcore and the old school street artists. The extreme perimeter is undefined chaotic edge, a liminal zone, and a place where strange attractors have as much likelihood as the distant core.