Guerrilla gardening, urban interventions, performance graffiti: many of these wild and freaky ideas that are only now being realized on the street have been around since the Yippies and Mail Art in the 1960s, probably even earlier. Maybe these ideas have been floating around in an idealistic haze of the adolescent Dadaists a hundred years ago. And finally the praxis is possible for these strange utopic ideas; they are practical. These ideas never really worked before because of the limits of communications; underground magazines were underground. Only Fluxus had the celebrity names and the cheap communications, courtesy of the US military mail; until the internet came along, again, courtesy of the US military. Not to get all internet utopian about it but the impact can’t be ignored, see my post about “Street Art and the Internet”. 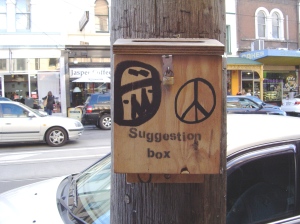 And if it didn’t start in the 1960s it happened soon after. Liz Christ and the Green Guerrilla group in NYC started guerrilla gardening and “seed bombing” in 1973. This was just a year after the first graffiti exhibition in NYC by the United Graffiti Artist group. (Maybe street art should be called “guerrilla decorating”.) The Wikipedia entry on “urban interventions” cites The Diggers theatre of San Francisco and the Dutch Provo movement as precursors. The Digger’s Free Store on Page Street, San Francisco, had a sidewall covered in frames called “Free Frame of Reference” The Dutch Provo movement were notorious for their happenings and white propaganda.

Amongst the many stranger street art activities currently in Melbourne there is Bados Earthling who calls his work “performance graffiti”. His character, a man from the future allows him to comment with confusion about the kind of activities that humans are currently engaged in. As Bados explains: “I’m like a child seeing something for the first time, with a million questions.” (See Invurt’s inteview with Bados.) Bados Earthling’s speech balloon blackboard creates a visual communication that the audience can participate and interact with. 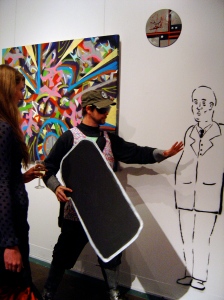 There are lots of these ideas floating around the collective consciousness like the spores of mushrooms just waiting for exactly the right conditions to germinate and fruit. “The question of ancestry in culture is spurious. Every new manifestation in culture rewrites the past, changes old maudits into new heroes…” Greil Marcus wrote in Lipstick Traces (p.21) and like Marcus I’m looking at the traces, the tiny amount that remains indicating the former presence of a thing. This is just an outline. It is an attempt to find or hunt down something.

And there are still stranger ideas that I have yet to trace amongst the drivel that various people from the 60s wrote (re-reading parts of Richard Neville’s Playpower has not been enlightening). What traces can we find in the past that explains present street art? And what new and strange will we next see on the street?

Writer, independent researcher and artist, Mark Holsworth is the author of the book Sculptures of Melbourne. END_OF_DOCUMENT_TOKEN_TO_BE_REPLACED
This entry was posted on Monday, April 18th, 2011 at 9:53 AM and tagged with Bados Earthling, Greil Marcus, guerrilla gardeners, Melbourne, Nick Ilton, performance art, pranks, pranksters and posted in Art History, Culture Notes, Street Art. You can follow any responses to this entry through the RSS 2.0 feed.
« Black Paintings
Gushing »

One response to “Strange Streets Indeed”