There are lots of rats in street art from Banksy’s rats to Blek le Rat but this is a new rat on the streets. The city as a rat race (see Wikipedia’s disambiguation) is the theme of the “Chazov-Dmytryk-Harkov deductive logic test” by CDH. It exists somewhere between a puzzle, a walk and a series of poster sized paste-ups. It is not a complex game, just as series of puzzle steps to a solution, but playing on the grid of Melbourne’s streets and lanes is a novel approach. This is a different use for paste-ups, sign posting a conceptual interactive puzzle walk through the rat race of the city. My legs are still aching from walking the route around Melbourne but I had fun solving the “Chazov-Dmytryk-Harkov puzzle. The centre of Melbourne has a lot of hills (Terry, the postman with a Collins St. route, nods in tired agreement) and I have been up several of them today.

The “Chazov-Dmytryk-Harkov” puzzle builds up a vocabulary of increasing complexity using the same map of the city and symbols. Puzzles and games require some kind of visual design element to assist comprehension and the mood, although some might find this particular game’s downbeat mood of Soviet psychiatry and rats rather dispiriting. You are the rat and you have to get to the cheese. These are not easy puzzles to solve; they require both mathematical, logic and spatial/map reading intelligence. It took me an hour and a half; I had to backtrack a couple of times when I realized that I hadn’t solved the puzzle.

In a remarkable coincidence I ran into Chris (aka CDH) the creator of the puzzle near the 3rd clue. At first he pretended to be just another guy looking at street art in the city but after the 4th clue he came clean. (LOL) I thought that he seemed too interested but wasn’t showing off enough intellectually at the 4th clue. (It reminded me of a conversation that I overheard getting off a tram. “If you don’t know how to do something with a computer just ask and someone will show you just so that they can show how smart they are.” Good advice.) 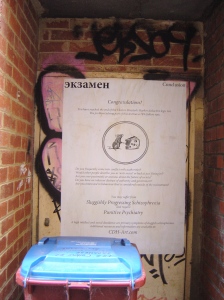 Exploring the city as a way of taking control of the public space, ownership by knowledge. Instead of treating the city like a rat race, the crowded city streets, the regular rat runs, between home and the cheese. This puzzle walk treats the city as a game board. I’ve written about urban explorers before in this blog (see Exploring Brunswick). There is so much to explore in inner city Melbourne: the network of little streets and access ways left over from the 19th century. Urban exploration is about learning about your local urban environment. It is a more dynamic and adventurous aspect of the flâneur. It is another way of approaching urban life. You might live in Melbourne but can you find Pesgrave Place? (It is off Howey Place, off Lt. Collins, between Swanston and Elizabeth St. – this is not a spoiler it is a red hearing.)

The rat race, the rat’s track, the path between the nest and food that in a plague becomes crowded with rats the rats. Then there are the lab rats used in a psychology test mazes trying to find the cheese in the fastest time, as if behaviorism… this game spawns so many thoughts… Situationalists…games as visual art…