The Rubble of History

“Cultural Rubble”, 1993, by Christine O’Loughlin, was re-installed on the façade of the new Ian Potter Art Gallery at Melbourne University in 1998. “Culture Rubble” is a large scale, site-specific installation of 4 panels in very high relief; statues and vases stand our almost complete above the surface. It represents the rubble of the classical world reinterpreted in the antipodes. 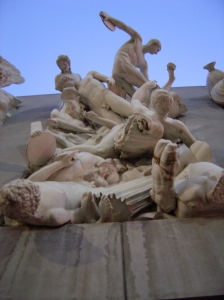 “Cultural Rubble” samples past images and recombines them to create a new meaning. It was the first public sculpture that said post-modern to me (although Paul Juraszek “The Sun & the Moon” 1989 is historically the first post-modern sculpture in Melbourne).  For me, “Cultural Rubble” was a visual proof of a paradigm shift in the collective consciousness. It demonstrates a post-modern sense of history, as opposed to the modernist rejection of history. It looked back not just to the classical Greek world but also to the history of art museums such as the paster-cast gallery in the V&A Museum. “Cultural Rubble” contains, in a way, the entire sense of art history embodied by the Louvre’s collection, including the Venus de Milo, the Winged Victory of Samothrace and the Discus Thrower.

The rubble has been broken, a symbol of no value, and then reassembled in a different order. It is like the Japanese Buddhist monks that cut up and reassemble a patchwork of fabrics or broken ceramics. It is not an effort to restore what has been sacrificed but find new meaning and order in the sacrificial offerings. Sacrifice is the reciprocal action to terrible destruction, however the sacrifice, itself is a terrible destruction require yet another sacrifice in order to restore the balance. The Christian iconoclasts and the modernists failed to clear up all the rubble of their destruction of the classical pagan world.

The artist, Christine O’Loughlin had lived and worked in France since 1979 and cast the sculptural elements for “Cultural Rubble” at the Louvre. “Cultural Rubble” is an early anomaly in Christine O’Loughlin’s sculptural work, in that it is not representative of her other work, except in its use of the poetics of displacement. She has continued to exhibit in Europe using the environment as her main sculptural material. 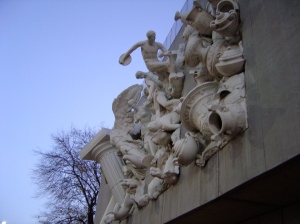 Writer, independent researcher and artist, Mark Holsworth is the author of the book Sculptures of Melbourne. END_OF_DOCUMENT_TOKEN_TO_BE_REPLACED
This entry was posted on Sunday, June 26th, 2011 at 12:40 AM and tagged with Christine O’Loughlin, classical sculpture, Ian Potter Museum of Art, Louvre, Melbourne University, Parkville and posted in Public Sculpture. You can follow any responses to this entry through the RSS 2.0 feed.
« Plato, Philosophy and the Arts
State Galleries & Politics »

2 responses to “The Rubble of History”