Pentridge Prison operated in Coburg between 1850 and 1997 and as in all prisons some prisoners were also artists (not just escape artists and bareknuckle bash artists). In 1886 professional photographer, Joseph H. Soden was convicted of forging pound notes and served time in Pentridge in the same year his photographs were exhibited at the Melbourne Intercolonial Exhibition.

In 1960 (or 1962 or1964) aboriginal artist Elliot Ronald Bull (1942-1979) painted the mural in “F” Division. Painted with ordinary house paint the mural depicts an aboriginal camp scene. Part of the stolen generation Elliot Ronald Bull had already studied painting with Melbourne painter, Ernest Buckmaster. After his release Elliot Ronald Bull participated in a number of solo and group exhibitions. Some of his mural at Pentridge has been preserved.

Having lived in Coburg for decades I can remember the prison in operation, closed the location being slowly rehabilitated. I can still remember hearing the howls that came from Pentridge at midnight on New Year’s Eve in 1991 when I was living a block from the prison walls. I also saw and photographed parts of the prison shortly after it closed. 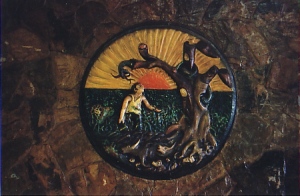 The escape proof Jika Jika Unit has been demolished along with the art on its walls. Prisoners had painted some of the yard walls of the Jika Jika unit. On the ceiling and walls of one cell an unknown, probably aboriginal artist had painted goanna with tracks leading up the wall and onto the ceiling. The simple elegance of this design helped humanized a dehumanising cell. 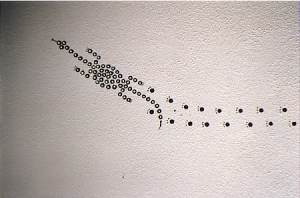 Towards the end of its long life Pentridge Prison did have various art programs for prisoners run by art educator, Dr Max Darby and painter, Margaret Miles. (See Dr Max Darby’s “My Days In Prison”.)There was also at least one prisoner art exhibition in a CBD bank – so if anyone knows anymore details about prisoner art in Pentridge Prison please comment before the details are lost to history and redevelopment.

P.S. I was sent the above photographs by a man whose father had been a warden at Pentridge in the 1960s. The painting was done in February 1961 by an inmate who signed his name J. G. Cust. We know nothing else but hope to find out more. (May 2022)