Gallery Smith and Purgatory Artspace occupy the same old brick warehouse on Abbotsford St. in North Melbourne. Gallery Smith is a large commercial gallery with two exhibition spaces and “the lounge” with a selection from their stock room. Upstairs in the loft the “project space’ of Purgatory Artspace is more Spartan affair, a minimal white cube space. While I was in North Melbourne I also stopped by No No Gallery but it was closed before an exhibition opening that night.

At Gallery Smith the British-born Brisbane-based artist, Ian Friend was exhibiting a series of oil paintings in the main Gallery 1. I sat on the comfortable white lounge in the gallery enjoying the calm ambience of the paintings. Friend’s cool, pale paintings are inspired by the poetry of English poet Edward Thomas (1878-1917) and the English landscape of the Southern chalk downs. Yellow, blue and grey dots float on a background of pale bands. One of the paintings, “Here love ends” provided a counterpoint to the series with a darker background, slightly rougher brush strokes and red tones. In Gallery 2 Valerie Sparks has a series of color photographs of taxidermy birds: “Little Bird, Big History”. The stuffed birds looked old but not as old as they actually were: they had been collected in the mid 18th century. The Yellow Tail Black Cockatoo was collected on Matthew Flinders’s second voyage to Australia. There were also some Eric Brigeman’s photographs stacked near the entrance of Gallery Smith; I recognized his work from last year’s Basil Sellers Art Prize exhibition. 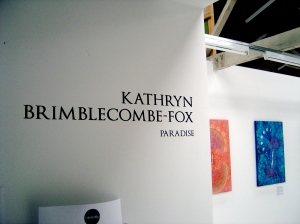 Upstairs at Purgatory Artspace there was a remarkable exhibition of 3D painting by another Brisbane-based artist, Kathryn Brimblecombe-Fox’s “Paradise”. I have never viewed a whole exhibition of paintings through polarized glasses. The paintings are not some purely technical exercise in creating 3D effects – the artist only discovered that her paintings worked this way by accident rather than design. The 3D effects are not mind blowing but very effective in their own right as parts of the paintings appear to float a centimeter above the background. Were it not for the 3D effects the mystical cosmic subjects of these paintings would have been a bit ordinary and superficial.

There aren’t many galleries in North Melbourne but there are more than there were only 5 years ago. I predict that there will be more in the near future as there are plenty of warehouses to convert in the area.

Writer, independent researcher and artist, Mark Holsworth is the author of the book Sculptures of Melbourne. END_OF_DOCUMENT_TOKEN_TO_BE_REPLACED
This entry was posted on Thursday, September 15th, 2011 at 11:11 PM and tagged with 3D, Gallery Smith, North Melbourne, oil paintings, Purgatory Artspace and posted in Art Galleries & Exhibitions. You can follow any responses to this entry through the RSS 2.0 feed.
« Managing Popularism
Pop of Pop »