Ophelia hasn’t jumped in the river and drowned she has been removed for a full restoration and will be returning to Southgate in November. Not Hamlet’s Ophelia but Deborah Halpern’s “Ophelia”, 1992, the concrete and ceramic sculpture with the face that was named “the official face of Melbourne” by Tourism Victoria in 1996.

The familiarity of the city landscape comes with a kind of blinkers that limit the number of things that are seen. As we become so familiar with the landscape we forget the past. Change in the city is continuos and there is a kind of social amnesia that most of us suffer from. Most people, including myself, cannot remember/imagine the city without certain public sculptures and so assume that a particular sculpture has been there for far longer than it actually has. 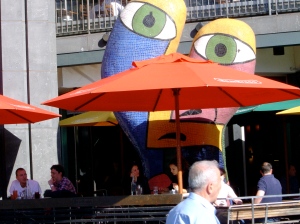 In case you hadn’t noticed Deborah Halpern’s 1992 “Ophelia” has been removed from the Southgate Complex on Melbourne’s Southbank. Bear Brass bar and restaurant has taken over the location with more out door smoker’s sections, it had already crowded the sculpture out when I photographed it over a year ago.

“We have been working extensively with the artist, Deborah Halpern and look forward to welcoming her (Ophelia) back very soon.” Jo Gartner, Southgate’s Events and Marketing Manager told Black Mark. “When Ophelia returns she will be located on the promenade directly opposite our main entrance, creating a natural meeting place for Melburnians on the river, and providing a stronger visual connection with the artist’s other major work Angel in Birrarung Marr.”

This is the second of Halpern’s Melbourne sculptures to have been moved from its original iconic location to a riverside location. Halpern’s “Angel” has been moved from the NGV’s moat to its current location (see my post: More of Melbourne’s Public Sculpture). Halpern’s concrete and ceramic tile sculptures were colourful and popular Melbourne icons of the 1980s and 90s. Have they now fallen from favour as tastes change? Or does their new locations give them new life?

Writer, independent researcher and artist, Mark Holsworth is the author of the book Sculptures of Melbourne. END_OF_DOCUMENT_TOKEN_TO_BE_REPLACED
This entry was posted on Monday, September 26th, 2011 at 5:29 PM and tagged with Deborah Halpern, Melbourne, Southbank, Southgate, Yarra River and posted in Public Sculpture. You can follow any responses to this entry through the RSS 2.0 feed.
« Logo Jammers
Vandals or Vanguards? »

2 responses to “Ophelia will return”