Walking around the city on Thursday I saw parts of the current Laneway Commission and parts of a previous Laneway Commission. And it reminded me of the words of Ruper Myer, the Chair of the National Gallery of Australia, at the opening of the “Space Invaders” exhibition art RMIT, when he said street art was creating “a paradigm shift in public art”. 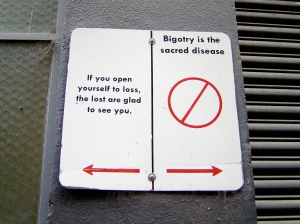 The series of signs by artist-poet, Evangelos Sakaris,“Word and Way” is still up in Heffernan Lane from the first Laneway Commission in 2001. I’ve seen some street art blog that mistaken thought that the signs were part of a street art urban intervention, yes, it is street art but it was officially commissioned.

Reko Rennie’s “Neon Natives” installation in Cocker Alley, a favourite location for Laneway Commissions. “Neon Natives” looks like advertising. The neon tubes and yellow and black zigzag background pattern are all familiar urban images. The background pattern made me want to look to see where the entrance to the multi-story carpark might be and then where all the animals might be.

I also saw the Graffiti Wall, a public art project part of the “Space Invaders” exhibition at RMIT. The wall is by Nails, Twoone and Al Stark – I’m not sure if it is completed or partially complete (the weather has been very wet). It is opposite RMIT Gallery, in a laneway off Little LaTrobe Street.

The Laneways Commissions in the city and the more recent MoreArts Show along the Upfield train line are evidence of the paradigm shift in public art. This paradigm shift requires a shift in understanding what is public along with what is art. Hopefully this will be an improvement on the bronze statues of historic heroes or the modernist public sculptures of big pieces of metal or stone. The new paradigm for public art may have some problems in its transient and ephemeral nature. What will the city be left with when the temporary art has faded from memories? (I’m sure that it will be well documented – unlike some sculptures and some urban interventions in the past). Permanent public art can create an identity for a location whereas temporary public art can only subvert the identity of the place, like the fake road signs of Evangelos Sakaris’s “Word and Way” – although this work has survived a decade. What do you think about this new paradigm?