Today I went to see the exhibition of six finalists for Melbourne Prize for Urban Sculpture 2011 in Federation Square. I looked at the sculptures and observed how the public was reacting and interacting with the sculptures.

The exhibition contrasted the obvious and constant sculptures and the intermittent and obscure sculptures. “The aim of the 2011 Prize is to focus on the urban environment and importance of sculptural practice, in its all its forms, and its role of informing and enriching public life and civic space.” How does the obscure inform or enrich public life? And how does an intermittent sculpture enrich a public space? 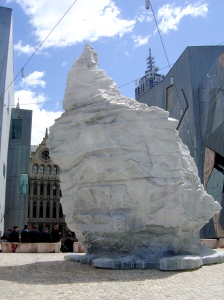 Isaac Greener and Lucas Maddock’s “Apostle No.2” is a reinforced polyester resin version of the original natural tourist icon that collapsed in 2005. People still pose for photographs with this smaller, semi-transparent version, as they did with the original monolith, but this time they can touch it. 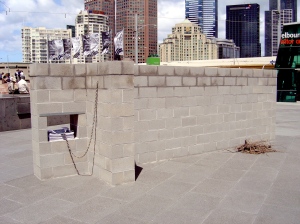 Hester, "a world, fully accessible by no living being", 2011

Bianca Hester, “a world fully accessible by no living being”. Although this sculpture is the winner of the Melbourne Prize the public were ignoring it; a man lights his cigarette in the shelter of the breezeblock wall and Xavier College students sit with their backs to the wall as they are lectured about the cathedral’s architecture. I didn’t see anyone else take the tabloid of proposals/propositions, stacked in a hole in the wall. The grey breezeblocks merged with the grey stone of the square.

Sonia Leber and David Chesworth “We, The Masters” (vinyl, 2 channel audio, speakers etc.) was only partially there. I saw the small vinyl banners text in the trees but in the text filled environment of Federation Square they made less of impact anymore than the other signs and advertising logos. I tried to hear if there was any sound coming out of one of the many speakers but I didn’t hear anything; I leaned so close that I bumped my head against the speaker – definitely no sounds were coming from them.

Clive Murray-White “Sara Delaney – a head of her time” is the most traditional sculpture in the exhibition; a face made of Chillagoe marble with a plinth of granite and galvanized steel. It was attracting some attention from other people in Federation Square; I had to wait for the cyclist to finish looking at it before I could photograph it. 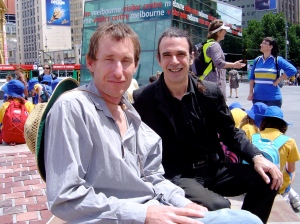 Time to look for Stuart Ringholt’s “Do you want to talk about sculpture?” Today I was the first person who had said “yes”. He said that it was difficult to get people to talk about sculpture. Stuart is recording the conversations to document them and photographing his contact. Stuart had a yellow plastic children’s seat with him as a token object or sign of sculpture.

I didn’t get to see Tom Nicholson’s “Unfinished monument to Batman’s Treaty”. This sculpture was another public action; for the duration of the exhibition with off-set printed black and white sheets, except that the woman had run out of copies by the time that I encountered her.

Not part of the exhibition but also temporary sculpture in Federation Square, were Dface’s two concrete spray-cans that appeared to break through the pavement. I don’t know if Federation Square is a good environment for sculpture, as the architecture of the square denies focal points. The square is designed to control the civic space and restrict public interactions.