Looking for a story on Flinders Lane

Looking for something to write about for a blog post I looked at the galleries along Flinders Lane.

When I went into Arc One I knew that I could write a blog entry about Lyndell Brown and Charles Green’s “The Dark Wood”. Their exhibition is a critical wet dream – I can tell my notebook: “collaboration…war artists…background field of green and browns…the paper sky has been wrinkled, the landscape becomes paper…the contradictions in Aust. foreign policy.” However, I have already reviewed their 2009 exhibition at Arc One.

I went downstairs to Fortyfive Downstairs and there was another possible story. Not the bland plywood architectural influenced work of Dayne Trower – the title says it all “Slow Decline”. But Mike Hewson’s “Under Standing Loss” could make a good story. Mike Hewson is a New Zealand artist whose studio was destroyed in this year’s Christchurch earthquake. He has even tried to recreate his studio in the backroom as well as framing a drawing pinned to the plaster studio wall that he sawed out before the building was demolished. Unfortunately I couldn’t get excited about Hewson’s paintings.

At Mailbox 141 Owen Hammond has a fun exhibition – “The Wonderful House”. Lots of fun with the simple form of a house: “Newton’s House” hangs in a series of pendulums, “Muybridge’s House” rotates on the dark time lapse photography grid, “Barb’s house” is a barbed wire house frame. It’s not substantial enough for a full blog post, and I’d get tired of the puns, but certainly worth looking at.

Flinders Lane Gallery was showing a surreal couple of exhibitions: Jon Eiseman’s quirky sculptures “Ships of the Night” and Juli Haas “Visions after Midnight”. Ann Schwartz Gallery had monumental video work by Gabriella and Silvana Mangano in the main gallery but upstairs Laresa Kosloff had a fun exhibition collecting artist’s signatures on her leg cast at the Biennale de Venezia, 2011. Charles Green and Lyndell Brown signed the cast along with Stuart Ringholt and about 17 other artists. Lots of Duchamp references could be made about this work but that means regurgitating my Master’s thesis, not a fun prospect. 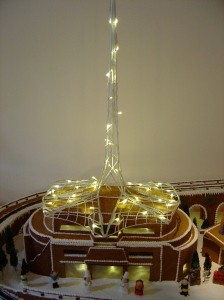 Later in the day I looked at a gingerbread city at the City Gallery at Melbourne’s Town Hall, very seasonal story, but not really as the Art Centre is shown with icing snow. The RMIT BA Gold & Silversmith Graduate Show, “It Was Like A Fever” at No Vacancy is also seasonal story – ‘tis the season student exhibitions.

When you look at a number of Melbourne galleries chances are one of them will be closed installing an exhibition. This time I was out of luck and two were installing: Craft Victoria and Until Never. While I was at Craft Victoria, I picked up a copy of Das Super Paper. I was looking for this month’s InTrouble to see if my article was in the print edition or just in the online copy. Anyway Das Super Paper is a great read, lots of excellent articles about art.

There are millions of stories in this city and hundreds of them are visual arts stories and these are some of them.