2011 was the year of the street. The revolutions in the Middle East, the Occupy movement across the USA (with a smaller local version) and other protests in Europe were all on the street. There are problems that have been building up, like carbon dioxide in the atmosphere, left unresolved for my entire life while a very few became disproportionately wealthy. And in 2011 this had gone beyond the limit of what most people can accept. 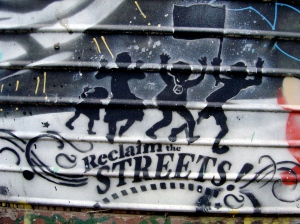 As well as the protests, street art has entered a new phase; in Melbourne’s streets and laneways it continues to flourish and diversify. On the street the woolly growth of yarn bombing expanded and yarn bombing entered the public consciousness. This is remarkable because just a few years yarn bombing was an obscure and eccentric practice. In previous years I have looked at the growth of exhibitions by street artist in galleries. There was no point in continuing doing it this year because of the exponential growth in the number of exhibitions and galleries specializing in artists from the street art movement. There were a few major street art exhibitions: “Space Invaders” exhibition at RMIT Gallery and Everfresh and other crews in NGV’s Studio space. And the documentary Writers Bench by Oriel Morrison and Spence David provided a history of the last three decades of Melbourne graffiti (read my review). Thinking about all of this I realized that the nature of public art has changed fundamentally.

The street art and the protests are interconnected. Syrian school kids started the revolution by spray-painting a wall and when they were beaten and tortured there were demonstrations that have continued and expanded as the cycle repeated. During 2011 revolution in Tunisia as most of the population was on the streets local artists carried their paintings through the streets; it was the perfect place to exhibit them. Egyptians painting walls during the protests, anti-Gaddafi paste-ups around Misrata; it is about the right to express your views.

The metaphorical significance of the street is akin to the real world. Street culture is seen as a real/symbolic cultural source: “reality-fantasy-symbol. Reality may easily be regarded as the most fantastic category, as the most crudely symbolic category. Symbol may be the realist, most accessible etc. etc.” (Richard Meltzer, The Aesthetics of Rock, 1987, Da Capo Paperback, p.14 footnote 1). Control of the streets is a symbolic status for the legitimacy of any government, hence the need for violent responses to street protests or artists painting on walls (read my blog post about Controlling the Streets from earlier this year).

The question of the year was does symbolic/real control make a government legitimate or does legitimacy of a spring from democratic elections, respect for human rights and representing concerns of the population? And in 2011 the answer appeared on the streets. 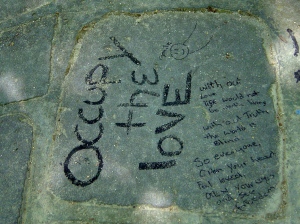