During the year I have reviewed about 70 different galleries (only about 30% of the total number of galleries in Melbourne) and even more exhibitions. I have tried not to have a favourite gallery; I have tried (unsuccessfully) not to review the same gallery or artist more than once. And there are more to see and write about than just art exhibitions; there is the street art, fashion and other aspects of Melbourne’s culture.

I saw a new public sculpture only this week when I walked through Chinatown – a bronze statue of Sun Yat Sen standing in Cohen Place Plaza on Little Bourke Street. Fortunately this is only a life-sized statue and not the 3.7-metre statue first proposed by Melbourne’s Chinese community in 2008. Why a statue of Sun Yat Sen in Melbourne? Well there are memorials to JFK, Elvis, Robbie Burns and General Gordon in Melbourne, so why not Sun Yat Sen? (The name of Cohen Place Plaza is coincidental and does not refer to Sun Yat Sen’s bodyguard “Two Gun” Cohen.)

It is an exhausting activity, all this writing and research – it is sort of masochistic. So I can understand why Deidre Carmichael has decided to stop writing the Art in Geelong blog at the end of this year. It is almost exhausting just reading and looking at what Arty Graffarti and Melbourne Street Art on Facebook add daily. Both have plenty of photographs of Melbourne graffiti and street art on a daily basis and Arty Graffarti does review street art exhibitions.

I met some of the people behind Melbourne Street Art on Facebook at the Blender Studios Christmas Party – that was a great party, art, music, open studios and fantastic people. It was an excellent way to end the year. 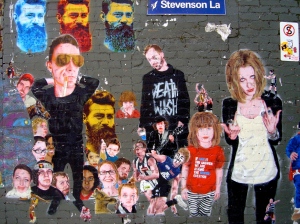 Between Christmas and New Year most of the galleries in Melbourne are shut but there is still plenty of great art to see in Melbourne’s laneways both the official, Melbourne’s Laneway Commissions, and unofficial Melbourne’s street art. When I was in Chinatown I found Yhonnie Scarce’s “Iron Cross” in Brien Lane. It is a symbolic memorial to the 50 years that her family’s life was controlled by Christian mission where “they were told what to wear, how to speak and when they were allowed to leave the settlement.” This year the Laneway Commissions were all by contemporary Aboriginal and Torres Strait Islander artists.

Near the beginning of this year I re-branded this blog to “Black Mark – Melbourne art and culture critic”. It wasn’t a very painful process except when it came to being indexed by PANDORA, Australia’s Web Archive; for some reason the name change caused lots of confusion there. I would like to thank everyone who has read Black Mark and especially Evangeline Cachinero, Peter Symons and Catherine Voutire for their help and encouragement over this year.