Monsters, Divers and More on the Street

Walking around Melbourne on Thursday I saw a variety of art on the streets from street art to public art, along with some art in an art gallery that referred to the street.

In Federation Square Theo Jansen’s “Strandbeest” were walking around delighting young and old. The two walking machines made of PVC pipes held together with cable ties are a combination of art and mechanical engineering. Although the larger one is meant to wind powered, that was in short supply on Thursday and pneumatic power was being used instead. 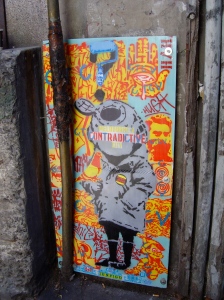 Another, and in my opinion the best yet, tribute to the destroyed Banksy’s Little Diver has been placed in Cocker Alley where the Banksy once was. This is stencil piece contains many references to Melbourne street art including Ha-Ha’s Ned Kelly, Phib’s hand with an eye, Hugh Dunnit’s Pinocchico, and the infamous CTCV capping.

There were fashion shoots in both Duckboard Place and AC/DC Lane; given the use that Melbourne’s fashion industry (along with the wedding industry) makes of Melbourne’s graffiti covered lanes it makes me wonder if they are doing anything to support the street art scene or if they are just exploiting it. I assume that Melbourne City Council charges for the right to close down the lane for a photo shoot (more exploitation of street art).

Further up Flinders Lane I saw Pamela See’s exhibition “White Wash” at fortyfivedownstairs. “White Wash” refers to buffing in Beijing and Brisbane. Brisbane based artist, Pamela See has made paper cuts and cut stainless steel versions of the white brush marks used to cover up unauthorized material on the street. The paper cuts of the brush marks complete with cut paper drips reminded me of Roy Lichtenstein’s enlarged abstract expressionist brush strokes.

Writer, independent researcher and artist, Mark Holsworth is the author of the book Sculptures of Melbourne. END_OF_DOCUMENT_TOKEN_TO_BE_REPLACED
This entry was posted on Friday, February 3rd, 2012 at 11:54 AM and tagged with Banksy, Federation Square, fortyfive downstairs, Laneway Commissions, Melbourne, Theo Jansen and posted in Art Galleries & Exhibitions, Fashion, Public Sculpture, Street Art. You can follow any responses to this entry through the RSS 2.0 feed.
« X interviews Y
Melbourne’s Art World »