Outside 1 Spring Street is C.O. Perry’s “Shell Mace”, 1989, a huge ribbed form of steel with a bronze coloured finish. Commissioned by the Shell Oil Co. American industrial designer, Charles O. Perry (1929-2011) was a sculptor, designer, and architect. There is another Perry sculpture, “Cassini”, 1978 outside the front of the Civic Arts Complex in Ringwood and three more in Sydney and Perth. Inside 1 Spring Street above the foyer is a large Arthur Boyd painting of swimmers at Shollhaven.

Most of the sculptures were added long after the buildings construction. BHP House, 140 William Street, built 1967 – 1972, added Robert Juniper’s C.O. Perry’s Shell Mace, 1989. “Shadow Form” is steel simplified organic forms, like a clump of steel plants amidst the glass and steel canyons of Melbourne’s central business district. The steel sculpture is appropriate for a steel framed building and for the former headquarters of the steel producer.

One difficulty in writing about these sculptures is identifying them, as unlike sculptures owned by the City of Melbourne there are no brass plaques in the sidewalk to identify the artist. On the corner of Albert St. and St. Kilda Rd. and out the front of The Domain (1 Albert Street) it is a corten steel sculpture, like a curved figure on a steel obelisk plinth. I wasn’t been able to find out anything about this sculpture or the sculptor but after an appeal on this blog it has been identified as the work of Robert Jacks 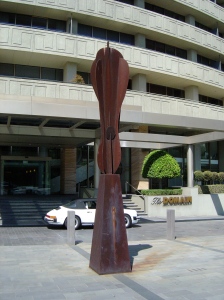 There are a couple of Akio Makigawa statues outside 479 and 509 St. Kilda Road. They were easy to identify as I have previously written a post on Akio Makigawa. 509 St. Kilda Rd, the MLC building has 3 black stone obelisks surmounted with white twists of marble turn on three different axes. There is a single obelisk surmounted with a leaf or flame of marble outside of 479 Dun & Bradstreet House. The obelisk is composed of alternating grey and white marble, a simple rhythm typical of Makigawa’s sculpture.

At the Lucient Building 430 St. Kilda Road there is a curved steel form set in a water-feature, a very shallow, black marble reflecting pond. A welded signature allowed me to identify it as Melbourne based sculptor, Geoffrey Bartlett’s “Orion”, 2008. I must write more about Barlett’s organic metal forms as he has many sculptures around Melbourne and is represented in significant public collections, like the NGA and NGV.

These sculptures are symbols of corporate wealth and power. The corporations aspire to own sculptures that exhibit to public that the company has wealth, power and a modern outlook.