Some have greeted the news of the appointment of Tony Ellwood to director of the National Gallery of Victoria (NGV) with joy. I am more cautious as the NGV has a lot of problems with its space, its collection and its role. Tony Ellwood was the directorship of both the Queensland Art Gallery and Gallery of Modern Art and we will see what he brings to the NGV. 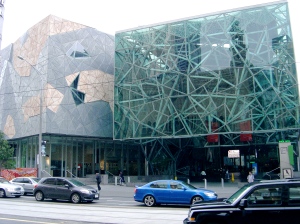 “At the beginning of the twentieth century the National Gallery of Victoria was one of the world’s most richly endowed galleries as Alfred Fenton’s bequest made available to it an annual amount exceeding the combined grants of London’s British Museum and National Gallery. Yet money alone could not secure quality or build a collection of distinction.” Elieen Chanin and Steven Miller, Degenerates and Perverts – The 1939 Herald Exhibition of French and British Contemporary Art, (The Miegunyah Press, 2005, Carlton) p.219

Elieen Chanin points to a series of problems with the NGV’s acquisition policy. At the beginning of the twentieth century the NGV was spending a lot of money on replica paintings and sculpture. The NGV also purchased of works of dubious authenticity like the “Rembrandt Self Portrait” in 1933. The NGV collection was focused on public approval and so many opportunities to buy modern art at good prices were ignored; unlike the Americans who leapt at the opportunity. The NGV then paid higher prices to acquire similar work later when public opinion had changed. There was criticism of these acquisitions at the time but the NGV choose to ignore rather than respond to them. Buying from Britain may have been loyal and patriotic when Victoria was part of the British Empire but 19th and early 20th British art has become a sidetrack in art history. And so the NGV’s collection is full of conservative taste, tax dodges and political interference and although this has improved in recent decades the effects on the collection remains.

The addition of the Ian Potter Centre: NGV Australia at Federation Square has improved the way its collection is displayed and along with the NGV Studio for street art and the NGV Kids space the NGV continues to expand in useful directions. However space is still an issue for the NGV, for example, their fashion exhibitions are still divided between galleries at the NGV International and NGV Australia (disrupting this distinction).

“There are 32 curators at the NGV but not one major exhibition” Juan Davila (talk 3/2/2012 “Dispersed Identities”, University of Melbourne)

Issues of space and the display of the collection in that space ultimately lead to the question of what is the purpose of having a public art gallery. The idea of the art gallery has been under-examined compared to the extent that it influences on the art it exhibits. Especially once the state had acquired all that valuable art. There is assumption is that an art gallery is educational housing a high quality collection to educate the next generation of artists and designers. However this educational assumption would exclude most contemporary art from the collection or force the gallery assume about the place of contemporary art in future education. Or is the role of a state gallery to enhance reputation of contemporary artists represented by Australian commercial galleries? Should its collection include examples of Melbourne’s burgeoning street art? Or, is it simply a location for infotainment, for host travelling international blockbuster exhibitions that can be measured in visitor numbers and revenue?