“If someone had one day in Melbourne they should wander the streets.” – Wonderlust

I am one of the wanders, the flâneurs, the urban explorers, the ghost-sign hunters, the psycho-geographical explorers of Melbourne walk its streets. I love to explore Melbourne. The city is an endless mystery, a muse that inspires me, a great cybernetic organism that reorganising, regenerating, growing and dying and constantly moving.

We who are also constantly moving no longer desire a walk in park, we don’t want designer urban environments with organized space. What we want is the disorganisation, the contrasts, the contradictions of the city and humanity. We want the sense of discovery. The designer environments shopping malls of Docklands or Southbank are too sterile compared to the culture along the long shopping strips of Sydney Road, Chapel Street or Brunswick Street or the network of lanes through the inner city.

Melbourne has long had a street life worthy of exploration. George Sala, the special correspondent for the Daily Telegraphy in 1880s, the man who coined the term “Marvelous Melbourne” imagined Parisians flâneurs would feel at home on Bourke Street. 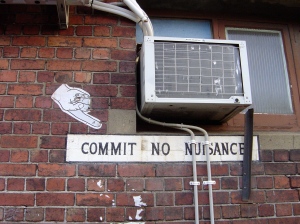 The antique hand painted signs saying  “Post No Bills” are all over Melbourne. The signs in the laneways of Melbourne’s Chinatown reads: “Commit No Nuisance”. Fly posting, fly tipping, littering, expectorating, urinating, pigeons, stray dogs, stray goats, stray pigs, bell ringing, loitering, the hoists over the laneways – of all the problems that Melbourne’s streets have faced graffiti appears to be the least of the problems.

Graffiti and street art becomes an excuse to explore the city, to go for long walks with a camera. It guides the flâneur through the seldom-used paths. You can tell when you are walking with a street art fans by the way they look down each alley and lane to see if there is anything on its walls. There are ghost signs haunting buildings, the fading images of old advertising from the days of hand-painted signs suggesting previous lives and times. There are new things to see everyday.

I’m looking for street art, for guerrilla gardening, art galleries, vertical gardens, unusual signs, urban wildlife and just the city. I enjoy walking; it is a healthy exercise for both the body and mind. What do you look for when you are walking Melbourne’s streets?

Writer, independent researcher and artist, Mark Holsworth is the author of the book Sculptures of Melbourne. END_OF_DOCUMENT_TOKEN_TO_BE_REPLACED
This entry was posted on Monday, July 9th, 2012 at 10:44 PM and tagged with Cave Clan, George Sala, ghost signs, guerilla garden, Melbourne, paste-ups, urban explorers and posted in Culture Notes, Street Art. You can follow any responses to this entry through the RSS 2.0 feed.
« Micro-Reviews of this Week
Statues of Women & Women Sculptors »