“Really?!” I think to reply. “They came onto your property and scribble stuff on the inside of your fence, that’s outrageous.” 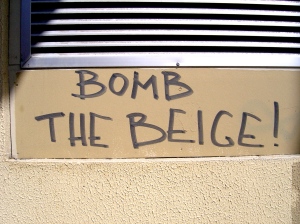 Public space in the city is an illusion. As far as the state is concerned it is the public and consequently public spaces organized like private space. In Melbourne public transport infrastructure is fenced off allowing buildings to go derelict rather than to allow any other use of it. Every defined border of public space, the walls and fences, is theoretically either privately owned or under the control of some government authority. Then there are private spaces posing as public space, like the shopping malls and pubs (short for public house). There is petty parochial nature in Melbourne with the proverbial dog in a manger attitude of ‘I was here first’ is matched by the territoriality of some graffiti crews.

What exactly the public is an even more complex political issue. Do you mean the sum total of all the individuals, including all the taggers, the psychos and the others that you might want to exclude, or just the mob majority? Or do you mean the mean average, the beige, neutral public, Baudrillard’s silent majorities the great force of inertia? Or a ghostly public that is altogether imaginary, theoretical and ideal, that is a cover for politicians and executives that essentially owns it and treats it as their private space. 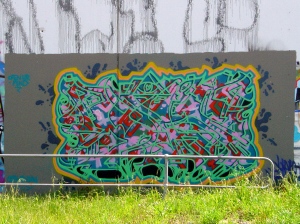 In part this post is a comment CDH’s article “Street Artists Aren’t Vandals”, that expands on the ideas in his Trojan Petition, because the issues are greater than just permission. A lot of new concrete walls went up along the Upfield train line in Brunswick, these walls haven’t been neglected but they are magnificent public walls for graffing. Street art, squatting and the Occupy Movement challenge and examine the sacred concept of ownership. The ownership on this city that was originally owned by the aboriginal peoples of the area has to be examined in a practical and civic way. Real and substantial damages should be the measure of a crime as opposed to transgressions on the sanctity of ownership.

We all share this city. We see it, hear it, feel it and smell it everyday. Tom Civil has spoken about “how street art and graffiti create community, mark space and act as a human-scaled anarchic form of urban architecture.” A piece of graffiti in a good location where nobody can be bothered buffing or a legal piece on the side of a house can last for ten or more years. It becomes part of the neighbourhood’s identity, in what is often a featureless uniform urban environment.

Street art explores the border of areas of the city, the areas of marginal interest, the laneways and alleys, the littoral zones of the walls that divide the city into sections. It challenges the ideas of public space.

Writer, independent researcher and artist, Mark Holsworth is the author of the book Sculptures of Melbourne. END_OF_DOCUMENT_TOKEN_TO_BE_REPLACED
This entry was posted on Monday, October 1st, 2012 at 11:15 AM and tagged with Brunswick, CDH, graffiti, Melbourne, Occupy Wall Street, public space, tagging, Tom Civil and posted in Culture Notes, Street Art. You can follow any responses to this entry through the RSS 2.0 feed.
« Repeatable Unrepeatable
Gertrude St. Culture »