I went on a weekend visit to Hobart to see MONA and the Tasmanian Museum and Art Gallery. Hobart is an attractive city to walk around even with the cold of earth spring. I couldn’t avoid seeing the public sculpture as I walked around the harbour. “Public art and artists can make a valuable contribution to the built and natural environment by celebrating, marking and revealing aspects of a community, its history, its character and its aspirations. A strong sense of place, identity and community invariably makes Hobart attractive to live in, work in and to visit.” (Hobart City Council website)

I enjoyed walking through Battery Point, the Salamanca Market (lots of woodcarving and woodcraft) and the Salamanca Arts Centre Precinct and along the harbour to the Tasmanian University Arts Centre. Along the way I saw a number of public sculptures along with other pieces of public art and design – gates, decorative paving and monuments. There was nothing out of place although some of it appeared a bit over the top, in particular the sculpture of Stephen Walker.

Stephen Walker was born in Balwyn, Victoria in 1927 and studied art at Melbourne Teachers College from 1945 to 47. Walker’s sculptures are over the top, neo-baroque spectacles; there are too many elements and too much going on. There are long explanations on bronze panels about the sculptures. Bronze is used to as much as possible and it is not surprising that Walker lives and works at his sculptor’s foundry at Campania, Tasmania. 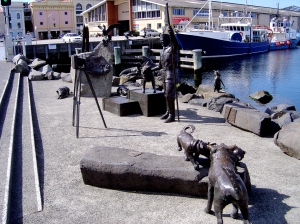 Walker’s “The Bernacchi Tribute: Self Portrait, Louis and Joe”, 1998 and 2002, is a series of bronze sculptures located between Victoria Dock and Macquarie Wharf. There is so much going on in this sculpture; it even has two names and two plaques. It started as bronze seal and penguins and then after a bronze camera on a bronze tripod, a bronze explorer, bronze skis, bronze dogs become “The Bernacchi Tribute” but somewhere along the way picked up the title, “Heading South”. Walker has himself made two voyages to the Antarctic in 1984 and 1986.

I preferred Walker’s more abstract “Tidal Pools,” 1970; the bronze fountain now in Mawson Place, Hobart but I never got a close look at it in its new location due to the traffic. “Tidal Pools was commissioned by the Bank of New South Wales, later Westpac, in the early 1980s. It originally stood in Sydney’s Martin Place. In 2000, when the bank extended its building, it donated $100,000 to dismantle the bronze sculpture and transport and install it as a gift from Westpac to Hobart.” (Nick Clark The Mercury 7/4/10)

I did take a close look at Walker’s “Tasman Fountain” 1988 or is it “Journey to Southland”, in Salamanca Place between Gladstone Street and Montpelier Retreat. It is one of the most over the top works of public sculpture that I have seen. In a circle with a rough-hewn plinth of white rock showing the Southern Cross in bronze is partially surrounded by a white concrete fountain with three bronze ships sailing in it. On the other side stands a full size bronze figure of Able Tasman – again so much bronze.

There is more to public sculpture in Hobart than the just the sculptures of Stephen Walker but they are bronze heavy weights.

Writer, independent researcher and artist, Mark Holsworth is the author of the book Sculptures of Melbourne. END_OF_DOCUMENT_TOKEN_TO_BE_REPLACED
This entry was posted on Monday, October 29th, 2012 at 11:13 PM and tagged with Abel Tasman, Bernacchi, bronze sculpture, Hobart, hobart city council, Stephen Walker and posted in Public Sculpture, Travel. You can follow any responses to this entry through the RSS 2.0 feed.
« Off The Wall
Arndt Migration »