“Rally: Contemporary Indonesian Art” at the NGV International was limited to two artists Jompet Kuswidananto and Eko Nugroho both from Yogyakarta. The title is wrong. “Rally” does not have exciting connotations in Melbourne just more of the usual politics. And this is not an exhibition about contemporary Indonesia and these two artists do not represent Indonesian and their art is about more than location or nationality. 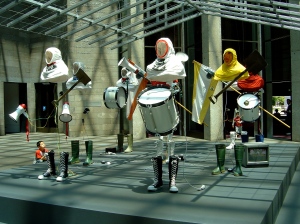 Jompet Kuswidananto’s installation, The Commoners, 2012 is a ghostly march of day labours in the foyer. Only their boots, tools, megaphones, drums and t-shirts tied around their heads and flags fluttering in the wind of leaf blowers were visible. Only the sound of their drums and street sounds were audible. (See my video on YouTube.)

The Commoners were attracting the crowds of young and old visitors but fewer were venturing down the corridor to see the exhibition. Most were off to see the Post-Impressionists or the rest of the NGV. I had seen works by Jompet Kuswidananto before, in 2009 at Bus Gallery and I wanted to see more – I wanted to see more of contemporary Indonesian art in general because there is so much going on in the Indonesia art scene.

Jompet Kuswidananto creates sculptures that make the figure disappear, only the accoutrements, the drumming and noise remains. These ghostly statues question the person in the military, the day labourers, the person made invisible by their occupation or nationality. The carnival of life is made up of so many ghosts in costume. These are not exclusively Javanese ghosts, the ghosts of our own history and culture haunt us.

The installation of the exhibition was fantastic, opening you up to the world of the two artists in a single room. Two sentinel figures sit at the entrance of the gallery by Eko Nugroho. Inside some of the walls have been painted in a pattern, corrugated iron lines another wall. The room instantly takes you to another world there is so much to look at.

Eko Nugroho’s work has all the intensity of street art. His street art background is clearly evident with images embroided on velour on the painted wall and his stickers, embroided badges, t-shirts, hoodies, tot bags, comic books and other merchandise at the gift shop. While at the NGV Nugroho painted the water wall; I only saw Nugroho painting on NGV’s water wall from the outside before one of the windows cracked and the whole thing was taken down (similar to Keith Haring’s experience with the water wall). As well as, painting a wall in Hosier Lane with his sci-fi inspired images with faces staring out of machines.

Eko Nugroho’s fantastic costumes are something else. Unlike Kuswidananto’s figures they are visible, like mad ravers or cultists from the future.