I saw some exhibitions in the city that I would give on average two stars. The problem of writing a three star review that I mentioned in my last post has come back minus one star. Two stars would indicates that it is less than average, that I am not recommending it to anyone and that I didn’t like it. But unlike films, music, and restaurants visual arts reviewers generally don’t use stars or any other comparative rating measurement. It is hard on the art and the artists to be summed up in a couple of symbols; a few nuanced words might be kinder to the artists but I’m not writing this for the artists but for their potential audience.

I know that I recently praised “raw, brutal and rough” art in my review of Brunswick Arts February exhibition but I didn’t like what I saw in the vitrines at Platform. Perhaps because it was just more of the same or that there was so much of it. “House me within a geometric quality” a group exhibition curated by Patrice Sharkey was a crude but systematic exploration of ways to fill the vitrines, either by covering the glass or putting objects inside. There are lots of plates of glass with interesting textures along with other lumpy things in the cabinets. (I can’t remember the exhibition of the same title from 2011 also at Platform and also curated by Patrice Sharkey but Dead Hare has a review of it.)

In Blindside’s Gallery One Jon Hewitt’s “Feel The Confidence” was just boring, the same photo of the top of Hewitt’s balding head over and over again along with repetitious name-dropping of contemporary artists. If it has any quality it probably went over most heads.

Sarah Bunting’s “Incessant Ruthlessness” in Blindside’s Gallery Two are a series of bad painting, not awful but not working either. Buntings painting are ugly crude and lumpy but they do have an unsettling sci-fi dystopian atmosphere. There is hope I’ve seen artists who painted as badly but after years of practice are now painting well and are successful. 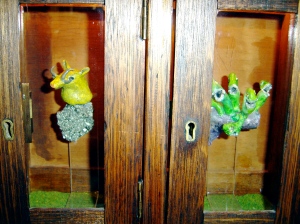 A passing woman summed up Brisbane-based artist Sue-Ching Lascelles exhibition at Mailbox 141 with one word: “cute” but I can’t sum up an exhibition in a single word, I have to explain myself. Mailbox 141 is a difficult space to fill; the fifteen small glass fronted former mailboxes in the tiled foyer of 141 Flinders Lane are not easy for artists. Sue-Ching Lascelles filled each of the mailboxes with a cute animal, bird and fish painted heads on bodies of un-worked rock crystals. The exhibition was titled: “Cabinet of Cities. Invisible Curiosities” and I could see that there were two problems with the title.