On Wednesday afternoon I was backstage at Hamer Hall talking with dancer Gengis Ademoski (aka Lil Ceng) of the Berlin breakdance group Flying Steps about breakdancing to Bach.

Lil Ceng exudes positive and focused energy; he looks it too, like an Olympic gymnast. Lil Ceng has a resting pulse rate of 74 and a pulse rate after power moves of 148 – maybe his pulse rate was going a little faster than his resting rate for the interview. I couldn’t recognize his accent, it turns out he was born in Macedonia and grew up in Germany. My first question was how did he start breakdancing.

“I see a lot of dancers on the TV and I was surprised, I was shocked to see all that they were doing and I wanted to do the same.” As it turned out he was watching Flying Steps on the TV.

Were you dancing on the street?

“Yeah. My cousins bring me to some people who were already doing break-dancing for a long time. I was like 10 years old.”  Then when he was 15 moved to Berlin and Lil Ceng started dancing with Flying Steps.

What about people who say that when breakdancing leaves the streets that it is no longer real?

How do you feel about dancing to Bach?

“It is different because normally we dance to funk, hip-hop, on beats. On classical music is different.”

I asked how the international tour came about. Melbourne is the second stop in the Flying Steps world tour that takes in Australia, Iceland, Chile, Poland, Belgium, Kazakhstan and Sweden.

“We start in Berlin with 15 shows and we never think about like this world tour. It crazy because, to start from the beginning; we practice for 2 months to make the show. We just think about think about Berlin but afterwards the feedback from people that like it. We are surprised.” 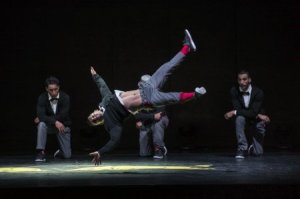 After seeing the show I wasn’t surprised at the reaction of the Berlin audience; Flying Bach is one of the best dance productions that I’ve ever seen. From the first steps the Flying Steps made you believe that Bach was meant to be breakdanced. The mix of elements in the performance was so beautifully balanced: the contemporary dance and breakdance and the mixed versions of Bach, the live and video elements, and the live music on the piano and the harpicord.

We talked about the diverse audience that the show attracts from little kids to older people and it was the most diverse audience that I’ve ever seen at Hamer Hall. Lil Ceng really wanted to speak to the older people: “they can see it is not just dance of the gangster, of young people with nothing to do. They say: ‘look that the young generation, they do something, it is like sport arts or ballet, they have to practice!’”

I asked if he’d met any Australian breakdancers.

“On Monday we did a workshop, lot of people, b-boys, b-girls. To see how they dance, everybody has a different style. It’s nice.”

The dancing itself was explosively good, incredible headspins and other power moves beyond anything that I’d ever seen breakdancers do before. I could see the inspiration that Lil Ceng says that he gets from Jackie Chan in his first solo where he was manipulating his backpack with his legs. There was a bit of a narrative holding the performance together that the dancers delivered with conviction.

I interviewed Lil Ceng and received tickets courtesy of Red Bull. The performance is actually titled “Red Bull Flying Bach”. Some of dancers, like Lil Ceng in the performance, were wearing Red Bull t-shirts or caps but it was not in your face given how often regular street clothes endorse products. I have to comment on the sponsorship because Red Bull are interesting sponsors; they have been sponsoring Flying Steps now for a decade. I was talking with Terry, the postman about it and he mentioned had seen the Red Bull F1 driver breakdancing along with members of Flying Steps. Red Bull had tied in their sponsorship of both events. Terry told me about their long-term sponsorship commitment to various extreme sports. I don’t know about extreme sports but “Red Bull Flying Bach” is an excellent example sponsorship producing great art.

Writer, independent researcher and artist, Mark Holsworth is the author of the book Sculptures of Melbourne. END_OF_DOCUMENT_TOKEN_TO_BE_REPLACED
This entry was posted on Friday, March 15th, 2013 at 12:20 AM and tagged with Berlin, breakdance, Flying Steps, Hamer Hall, Johann Sebastian Bach, Melbourne, Red Bull, Red Bull Flying Bach and posted in Culture Notes. You can follow any responses to this entry through the RSS 2.0 feed.
« Street Culture Centre for Melbourne
Uses of Art in Public Space »