Graffiti and street art keep Brunswick looking dynamic. I’ve been bicycling around Brunswick keeping my eyes open, trying to explore a bit but still finding new interests on familiar paths. Brunswick is full of pieces by the AWOL crew and Lush but I’ve written about them in previous posts. Lush has been everywhere, exploring and painting in all the laneways of Brunswick. 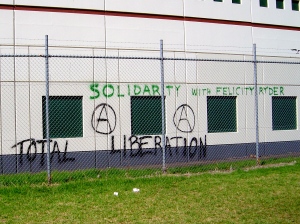 The anarchists are the only people who bother to scale Safeway’s barbwire topped fence to write their messages on its pristine walls. Felicity Ryder is an Australian anarchist currently on the run in Mexico; Ryder was previously involved with the anarchist bookshop Barricade Books in Brunswick so I guess she still has some friends in the area. The words “Total Liberation” appears to be a reference to the Mexican anarchist website Liberacion Total where Ryder’s statements have appeared. 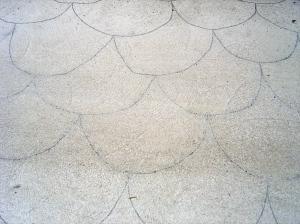 As I step outside of Tinning Street Presents and look down at the concrete on Ilham Lane; to my surprise someone has proved me wrong – street art using wet cement – I didn’t think that I’d see that because writing in wet cement is opportunistic but I wasn’t that surprised given the area where there are plenty of creative people.

Here some other little bits of street art that I liked seeing in Brunswick. 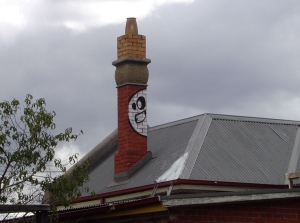 The painted chimneys on this old house; the old house is now surrounded by new developments.

The ceramic unofficial tile street-sign for Ovens Street, I like ceramic tiles as street decoration and Ovens Street is always worth riding down because of the great graff along its south end. It is these small anarchic touches that make bohemian Brunswick.