When I was a student at Bendigo High School I found a copy of The Secret Life of Salvador Dali (1942) in the library. Reading it made my life in Bendigo bearable for two more years. I was aware of Dali’s paintings from earlier art classes, when we had briefly looked at Surrealism, but the reading his book was a great experience at that time in my life. “’Do not commit suicide, for surrealism has been born’, might well be the phrase cried in the night to a desperate civilisation.” This quote from James Gleeson explains my situation in Bendigo as alienated 16 year old yearning to escape from the small rural city. As a solution to adolescent angst Salvador Dali was better than Bowie. 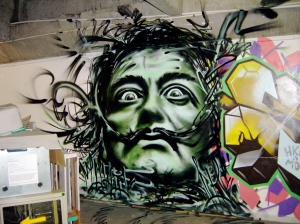 Dali in aerosol in the Collingwood Underground

Dali’s creation of a surreal self was one of the archetypal images of the 20th Century. Subsequent pop stars, like Bowie, would follow the process of egotistical autobiographical creation, the cultivated image and eccentricities that was Dali. However, Dali is a complex character and not just a superficial attention-seeking artist; I understood this when I read his essay on art nouveau, it was the most intelligent and concise analysis of the style that I had read. His interest and understanding of both science and mythology are far from superficial.

Dali’s technical mastery of painting and drawing is amazing and is this technique that accounts for much of Dali’s mass popularity. Later I read his book 50 Secrets of Magic Craftsmanship (Dial Press, 1948) it was useful to me as a painter but like a book of arcane knowledge you have to be wise enough to see the nonsense scattered amongst true information. But there is more to Dali than artistic technique; he co-wrote with Luis Buñuel, the landmark Surrealist film Un Chien Andalou.

Travelling in Spain I took the opportunity to see Dali’s hometown of Figeros and the museum that he created there in his last years. From my travel journal: “ 27/4/2000 I don’t believe it but I made the 7:50am Figeros express and I’m on my to Dali territory. It just shows how easy it is to get around in Barcelona. The weather is a bit overcast and clouds shroud the mountains. I’m still having very strange dreams and waking up a couple of times a night…jetlag? … I was very glad that I visited the Barcelona Museum of Modern Art to understand Dali’s early influences and references… Museum Dali-Gala is full of moving sculptures, coin operated sculptures and optical viewers (25 pestas), peepholes and cues of people waiting for a particular view… Fortunately there is a garden to relax in because the crowds are worse than the Uffizi or the Vatican Museum.” It was the most fun museums that I ever visited, if Dali knew how many visitors would come he would have installed a fair-ground cars like a ghost-train.

I really do think that Dali believed that art was equal to spiritual salvation. As Gainsborough said on his death bed: “We are all going to heaven and Vandyke is of the company.” Painted on the ceiling (1100 x 575cm) of one of the rooms the Museum Dali-Gala is a vision of the apotheosis of Gala and Dali, the huge feet on their foreshortened bodies is most of what that we mortals can see as they ascend to a Dali heaven. The painting might appear egotistical, grotesque and even kitsch but what of its message: if prodigious artistic talent doesn’t make you immortal then what does?

Over my life I have sometimes tired of all images of Dali that are commonly repeated, the commercial industry built around his art, sometimes he has been too much, but there are so many aspects of Dali that I keep on returning to him as a person of interest.

This is part of a monthly series about artists, writers and thinkers who have had an impact on me at some time in my life and have continued to have an impact.