There isn’t much Korean street art, well, I didn’t see much on my recent travels. Most Korean graffiti is traditional, back before old school; people writing on the wall with pens. The absence of aerosol graffiti or street art is not due to Korean respect for property; Koreans write on the walls, in stairwells, on rocks and even in museums. 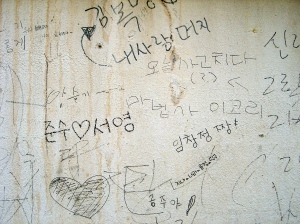 Writing on the stone of Inwangsan Mountain, Seoul

There is even traditional Korean writing on the rocks of Inwangsan mountain in Seoul.

In Seoul I saw more street art than old school aerosol graffiti and I saw more aerosol art in the lanes of Gyeongju that I did in Seoul. I’m told there is some in Seoul but Seoul is a very big place and although I followed up some leads and looked down many streets and lanes, I never saw it. This post comes with my usual caveat about commenting on the graffiti and street art of other cities applies here; I probably didn’t know the best locations to visit, that street art is ephemeral and I was just seeing what happened upon during my travels. Normally I see some graffiti along the railway tracks when I travel by train but there was none in Korea. I saw some in the many laneways of Seoul and Gyeongju. 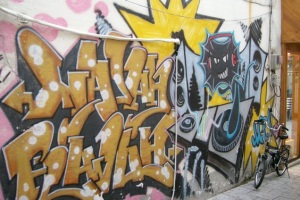 I saw a great paste-up (wheatpasting) in the Bukchon district of Seoul. There were also some stencils and other work in this attractive and cultural significant area.

Of course there was some tagging and stickers in Seoul – mostly by Zacpot, he is everywhere with stickers and pens. 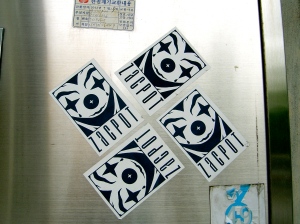 There is lots of potential for some truly great street art in Korea, there are a lot of great walls it just needs artists who want to do it (along with better cans and caps).

Writer, independent researcher and artist, Mark Holsworth is the author of the book Sculptures of Melbourne. END_OF_DOCUMENT_TOKEN_TO_BE_REPLACED
This entry was posted on Monday, July 1st, 2013 at 2:52 PM and tagged with graffiti, Gyeongju, gyeongju south korea, Korea, paste-ups, Seoul, stencils, sticker art, stickers, wheat pasting and posted in Street Art, Travel. You can follow any responses to this entry through the RSS 2.0 feed.
« Seoul Man
Seoul’s Big Art Museums »

One response to “Not Gangnam Style – Korean Street Art”