Notes from the Pop Underground edited by Peter Belsito (Last Gasp, 1985) aspires to be Calvin Tompkins The Bride and the Bachelors: 5 Masters of the Avante-Garde (1965) for the eighties. Both books are a series of interviews, horizon scanning the horizon for the arts. Tomkins interviewed Marcel Duchamp, Jean Tinguely, John Cage, Robert Rauchenberg, and Merce Cunningham. Notes from the Pop Underground had a broader focus including the performing arts, literature and film. And Peter Belisto has interviews with: Survival Research Laboratories, Diamanda Galas, Church of the Subgenius, Robert Anton Wilson, Jim Jarmusch, Michael Peppe, Raw Magazine, Keith Haring, Jello Biafra and Spalding Gray. (You can give yourself out of ten if you have seen the work of these people.) 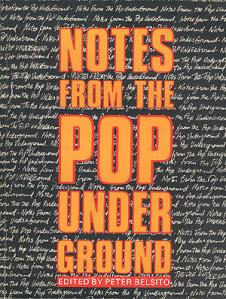 I remember buying this book; it was on the special’s stand at Minotaur Books back in the late 1980s. I’d heard of a couple of the people in it and after seeing the photos of Survival Research Laboratories and Diamanda Galas I had to buy the book. It soon became a favourite and I continue to update it with references to articles and dates of death. The first thing that I did when I heard that Spalding Gray was dead was to make a note in my copy of Notes from the Pop Underground.

Before I bought the book I’d heard of 3 people on that list: Robert Anton Wilson, Jim Jarmusch (thanks to the Valhalla Cinema) and Keith Haring (because he had painted walls in Melbourne). Since reading the book I have encountered, through various media, all of them again with the exception of Michael Peppe.

When I started thinking about my Person’s of Interest series for this blog Notes from the Pop Underground instantly sprang to mind. It was a great predictor of culturally significant people from the pop underground, some emerged from the underground into the mainstream but all had incredible artistic vision. The 1980s came across loud and clear. It was a time when you could see the future while still living in a past full of analogue technology.

Diamanda Galas’ concert in Melbourne a few years ago was magnificent. I was also impressed by the number of people that walked out, Melbourne’s Concert Hall must have emptied by two thirds. And how in the taxi ride home the taxi home the Armenian taxi driver was happy to hear that she sang an Armenian folk song.