I was going to comment that this year in street art had a bit dull… the same old same old stuff on the streets, no innovations or developments like yarn bombing or street sculpture. But then along came Doyle with his Empty Nursery Blue in Rutledge Lane. And the division between the technical and the conceptual elements in street art was brought into even sharper contrast with CDH’s article “The Commodification of Street Art” in the September issue of Art Monthly Australia and E.L.K.’s reply “The mouse that sunk the boat” on Invurt. 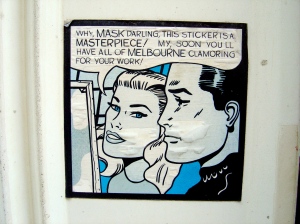 I am used the word “technical” in the last paragraph to describe the work of artists with the technical skill of stencil cutting, aerosol spray skills, etc. in contrast to the conceptual, thinking of and executing an idea. I am using ‘conceptual’ in the way that Galenson uses it, to refer to conceptual break through from collage to video art, and not to exclusively refer to works of conceptual art; David W. Galenson contrasts modern and contemporary conceptual and experimental artists in his book Conceptual Revolutions in Twentieth-Century Art (Cambridge University Press, 2009, New York). I’ve used the word ‘technical’, rather than ‘experimental’ because there aren’t that many experimental artists, in Galenson’s terms, on Melbourne’s streets, most are content to become technically proficient, although Slicer, Reka, Conrad Bizjak and others might count as experimental.

Aside from the conceptual versus the technical there is a contrast in the ideological purity of CDH’s position opposed to the pragmatic concerns of E.L.K. The utopian ambitions of the politics of conceptual artists have often caused them to cry: “sell out” (in various ways, like all the “expulsions” from the official Surrealist movement). This usually been countered with accusations of lack of talent or technique but this doesn’t address the real differences between the two radically different approaches to art. The conceptual artist is not interested in the technique but the politics or philosophy of artistic progress and likewise the technical artist pragmatic has little time or interest in philosophy or politics.

Specifically in reply to CDH’s article I would argue that street art is not held back or corrupted by its commodification because that was happening since the beginning of street art; Fab 5 Freddy was exhibiting in galleries in 1979, it is part of the street art system. Nor is being distorted when graffiti goes mainstream that was also happening since the beginning, appearing in pop music videos like Blondie’s “Rapture” (1981) and the 1983 PBS documentary, Style Wars, for example.

In Glenn Adamson and Jane Pavitt’s introductory essay “Postmodernism: Style and Subversion” the authors examine Alvin Toffler’s mainstream absorption model where “the potential disruptive energies of the subculture are controlled, and the hegemony of mass culture is continually reasserted” and provide a counter example, hip hop, where “the process of mediation and commoditization were factored in all along”. (Postmodernism: Style and Subversion, ed. Glenn Adamson and Jane Pavitt, V&A Publisher, 2011, p.53) To put it bluntly not all subcultures have the same relationship to mass culture as hippies or punks.

Finally, I have no aesthetic or political opinion on the matter for without conceptual artists there will be little or no innovations or developments in street art but without the technical artists there wouldn’t be as large an audience or the interest. What I think is holding Melbourne’s street art back is the conservative traditionalists in street art and graffiti that believe that they can enforce their various definitions; in this respect they have a similar attitude to their traditional opponents, the police, railway security and city councillors. 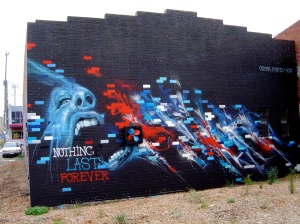