This is the fourth year of MoreArt 2013 Moreland City Council’s annual public art show. I enjoy the transformation of my regular bike path along the Upfield line. There are installations in Jewell, Brunswick, Anstey, Moreland and Gowrie. The unused ticket booths of these formally manned train stations have been turned into spaces. Phil Soliman uses a locked seating area at Moreland for his The Great Pyramid; a model of the three pyramids at Giza made of fava beans on a commercial prayer mat along with some stones (stone throwing is optional).

The best locations in this exhibition are in some neglected urban spaces between Moreland Road and Tinning Street as they are completely desolate and already surrounded by chain link fences. I talked with artist Liz Walker about the attraction of these vacant spaces at the opening. “You see things in the ordinary that you wouldn’t notice before.” Liz Walker told me. 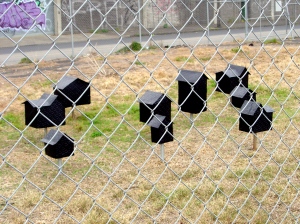 Lots of people were appreciating and using Bush Projects Soft Infrastructure at the Mechanics Institute. The large purple tubes (100% recycled P.E.T. felt, stuffed with straw) surrounded the garden and trees and made comfortable and warm seating for the large crowd of people at the official opening. The idea of soft infrastructure of recycled material for events like the MoreArt show opening.

It was a typical Moreland Council opening with Red Brigade Band marching in followed by some folk music and a cue at the bar. I was keeping a weather eye open, the grey clouds had been threatening all day and the wind was freezing my ears. Right on cue as the speeches started there was a light drizzle but it didn’t last long. 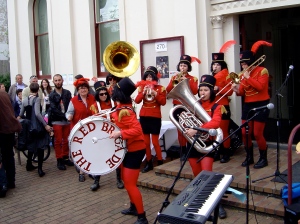 Red Brigade at the Mechanics Institute

Then there was the usual round of speeches from a Wurundjeri elder, the Mayor, curator and judges.

Michael Carolan Hey You Try Me a sound and video installation that really used its location of the old ticket booth won Indoor Award. Phil Soliman received a honourable mention for his installation.

The Outdoor Award was won by Alica Bryson Haynes The Shape of Things to Come at Coburg Mall for its multi-cultural community engagement. 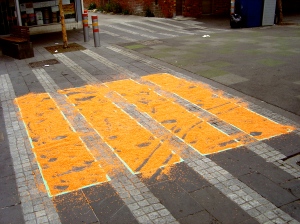 Alica Bryson Haynes The Shape of Things to Come

Riza Manalo won the Brunswick Station Gallery Award for an artist to curate a program of art at the stations along the Upfield Line for her work The Visitor.  (No photo available as it is a projection on the Mechanic’s Institute.) 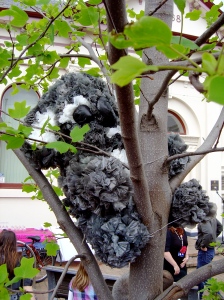 Writer, independent researcher and artist, Mark Holsworth is the author of the book Sculptures of Melbourne. END_OF_DOCUMENT_TOKEN_TO_BE_REPLACED
This entry was posted on Sunday, October 6th, 2013 at 7:18 PM and tagged with Brunswick, Coburg, Liz Walker, Michael Carolan, MoreArt, Moreland City Council and posted in Art Galleries & Exhibitions, Public Sculpture. You can follow any responses to this entry through the RSS 2.0 feed.
« DADA at MUMA
The Flâneur’s Surface Archaeology »