Public sculptures, old buildings and ghost-signs are the surface archaeology of the city. Surface archaeology is established archaeological practice for providing data on settlements. The urban archaeologist conducts a pedestrian survey of the surface features, digital camera on my belt to collecting samples. By looking and researching the history you can see distinct layers in the psychology of Melbourne through its history. 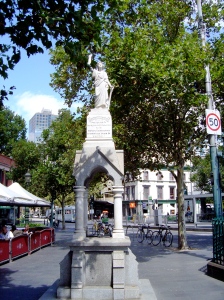 The city is both familiar and unfamiliar at the same time; there are so many unfamiliar areas and so many changes to familiar routes. There are constant changes, sometime ago I asked Terry the postman, whose route is in the CBD, if there was more building work going on, but he didn’t think so.  So accustomed am I to my various routes that I note the smallest changes.

I take note the ephemera of the city, the layers of posters and graffiti, like a detective gathering evidence on the endless mystery of the human existence that exists, so tightly packed together, in all directions. For this reason I find myself interested in buildings for different reasons other than their architecture; I warm to their history and function. Look at the modifications, alterations and their changing functions. For this reason I like to look at the back of buildings rather than their façade.

This week I’ve continued to wander the city. In my perambulations I saw the Platform exhibitions; I could not resist the opportunity when passing through Flinders Street Station to walk down Degraves Street. Sophie Neate and Sean McKenzie Glass Room was engaging installation about the mystery of the machine made. I particularly enjoyed Chris Rainer’s Topographic Schematic no.24 because of the musical composition. Rainer’s installation suggested the idea of military interception of all communications, symbolized by tape going through the plastic model watchtower and German soldiers. 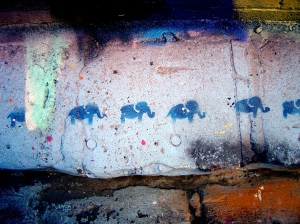 Blue Elephants on the curb of Rutledge Lane

Equally I could not resist the opportunity when in the city to walk down Hosier Lane. I could get all excited about the Banksy that got painted over last week but I’ve seen it all before, these things happen every couple of years and nobody expected them to last forever. (see the report in The Age).  I’m just taking more photographs of the city before it disappears. My photographs of the city become like a stamp collection and I enjoy looking at the collections of other of Melbourne’s flâneurs. Do utility boxes have to look utilitarian? (See ones painted by notable Melbourne Street artists at Land of Sunshine.)

Writer, independent researcher and artist, Mark Holsworth is the author of the book Sculptures of Melbourne. END_OF_DOCUMENT_TOKEN_TO_BE_REPLACED
This entry was posted on Thursday, October 10th, 2013 at 5:41 PM and tagged with archeology, Banksy, Hosier Lane, Melbourne, Platform Artists Group and posted in Art Galleries & Exhibitions, Culture Notes, Public Sculpture, Street Art. You can follow any responses to this entry through the RSS 2.0 feed.
« MoreArt 2013
Capon needs a Spanking »