The Australian government is spending $140m-plus for the WWI centenary, compared to the British government spending £55m ($94m) Paul Daley reported in The Guardian (15/10/2013). 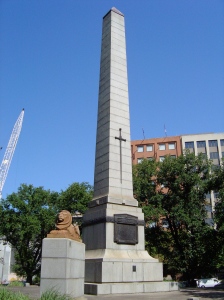 War memorials are a very important part of constructing a national identity for Australia. They stand as demonstrations of loyalty to the Empire, the British or the American empires. Australia defined its national identity by the wars where Australian troops served and were identified as Australians. The first war that Australian colonial soldiers fought and died in was the Boer War and there are many monuments in Melbourne to the Boer War, or as the Brunswick memorial refers to it as the “South African War”. The first war memorial constructed in Melbourne was the monument to the 5th Victorian Contingent in 1903, a gothic revival style shrine by architects George de Lacy Evans and sculptor Joseph Hamilton.

Initially the construction of these memorials is understandable. As the Australian troops who fought in the Boer War and First World War were buried where they died their immediate families in Australia had nowhere to grieve. There are many war memorials scattered around Melbourne and its suburbs frequently with a statue of a soldier on top of them. There are so many local war memorials that a law was passed in 1916 to control their numbers. 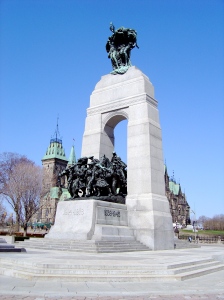 Melbourne’s Shrine of Remembrance is huge. It is far larger than other British colony’s war memorials, except for the later constructed Australian War Memorial in Canberra that combines a shrine, a museum, and an extensive archive. The Shrine of Remembrance dwarfs the Canadian war memorial in Ottawa. The Shrine was built between 1927-1934; paid for largely with public donations, although the Victorian and Commonwealth government did make some contributions. General Monash was the driving force behind the Shrine and its status; his background in civic engineering finding expression in this enormous quasi-religious area of the city that has become dedicated to memorials to Australian soldiers and campaigns.

WWI created a rupture in funerary conventions in Europe and America with the accumulating memorials overwhelmed people. “Whereas around the turn of the century full-length figures were far the most popular, after 1914, and in line with growing nerves about statuemania, busts assume the lead.” [Penelope Curtis, Sculpture 1900-1945 (Oxford University Press, 1999, Oxford) p.43] But it did not slow the production of statues in Australia. Charles Marsh Web (Nash) Gilbert (1867-1925) made a total of 9 WWI memorials, more than any other Australian sculptor.

The present fervour for war memorials and ‘Anzackery’ is because there is almost nothing that unites Australia. It is populated by disposed aboriginal tribes, exiled convicts, British colonists and post WWII immigrants from around the world. Australia it is not united by race, language, religion or any ideals. There is no Australian dreaming.

There has always been very limited social cohesion in Australia (in WWII fearing invasion by the Japanese separate trenches were dug in Swan Hill by the Catholic and Protestants that faced each other). Australia is simply an artificial construct of British law that exists as a client state for the benefit of the Anglo-American empires, so the sacrifice of Australia young men for these foreign causes is very important to Australia’s national identity. This limited social cohesion is reflected in Melbourne’s public sculptures (see my post Heroes of Every Nation).

This explains the investment in making these wars and battles a central element of Australian identity. And as uncertainty grows about what these memorials mean to the collective consciousness of Melbourne more didactic plaques and visitor centres has been added. A recent addition to the art deco Boer War Memorial by Irwin and Stevenson is a large bronze plaque with low relief figures and text to explain Australian involvement in this colonial war in South Africa. The addition of this didactic plaque demonstrates the uncertainty of this monument’s meaning in the 21st century.

Writer, independent researcher and artist, Mark Holsworth is the author of the book Sculptures of Melbourne. END_OF_DOCUMENT_TOKEN_TO_BE_REPLACED
This entry was posted on Tuesday, October 29th, 2013 at 1:34 PM and tagged with Australia, Australian identity, Boer War, Melbourne, war memorials, WWI and posted in Architecture, Culture Notes, Public Sculpture. You can follow any responses to this entry through the RSS 2.0 feed.
« Jericho to Jerusalem
Birrarung Wilam and other public art »

2 responses to “An Expensive Identity”