This is a story about a shy suburban guy living the suburban slumber of the sedated lifestyle waking up. He doesn’t go wild and try to stay wide-awake all the time. He just calmly looks around at what is going on in the big picture, tries to find a voice and then uses his voice get involved. What more can be expected in a life? 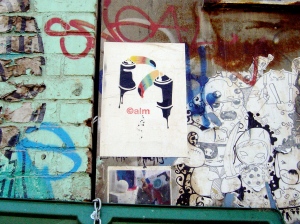 Calm found his own voice with first with a mock Neighbourhood Watch poster featuring a Planet of the Apes gorilla and the slogan: “control the human pests”. He has gone on to more paste-ups with his pertinent satire in Melbourne streets.

Calm is a Melbourne street artist who has been working on the street for the last three years. Married with three children, unlike many other street artists he does not have an art school or design background. He is still refining his spray-painted multi-layered stencilled techniques that often does on paper before pasting them up in the street. He has been in a few group exhibitions mostly for charities and was involved with CHD’s Trojan Petition in 2012.

It isn’t often that you hear an artist talk about the work life balance, sometimes you are just amazed that they have a life. It is not that Calm is prolific, he doesn’t do massive runs and paste-up everywhere, but the quality of the work makes it stand out and he is happy with the balance in his life now. There is a balance in his art, it is not all political, there is also his Toucan spray-cans. 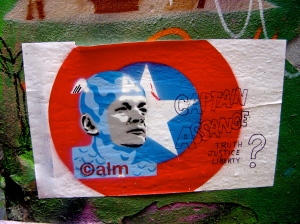 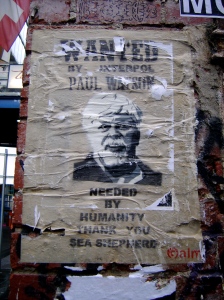 Calm’s pop political posters of current political figures satirize and comment on the media’s current cast of heroes and villains. The simple form and the few colours keep the design clear and concise. Calm’s satire doesn’t preach or rant but has a cool, wry and ironic quality. Often there a few different angles; referring to his Bradley Manning in football uniform, Calm points out that there are a few quarterbacks named Manning in the NFL. 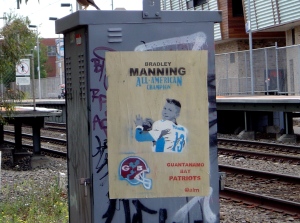 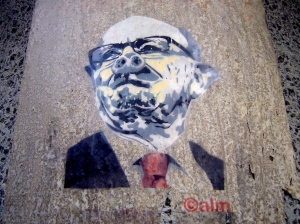 When I mentioned that his Murdoch swine was a bit vicious compared to his lighter touch with other work, Calm replied, “Sometimes you’ve got to do it.” It was saying what everyone was thinking of Murdoch after News of the World.

Calm see his street art as a way of breaking the advertising monopoly on public space and the public conversation. Calm’s images are like single panel editorial cartoons on the pages of the city.

Writer, independent researcher and artist, Mark Holsworth is the author of the book Sculptures of Melbourne. END_OF_DOCUMENT_TOKEN_TO_BE_REPLACED
This entry was posted on Wednesday, November 13th, 2013 at 12:08 AM and tagged with Bradley Manning, Calm, Melbourne, paste-ups, Rupert Murdoch, stencil art and posted in Street Art. You can follow any responses to this entry through the RSS 2.0 feed.
« Plinth Projects
2Do @ An Art Museum »

One response to “Calm Collected”