Charlatans of the Art World

The accusation of charlatan is sometime levelled against some artists. Robert Hughes made this accusation to Jeff Koons. Koons replied to was to point out that if had put his talents to use in the business world he would have a bigger income.

I regularly play tabletop role-playing games and the players have a variety of ambitions within the game: the power player, the character actor, the storyteller and the puzzle solver are the typical variations. Like any game there people playing it for a variety of reasons from the social to personal. In the game of art there are artists and other people playing with all kinds of ambitions within and outside of art.

There is early episode in The Adventures of Huckleberry Finn, when Tom and Huck are playing at highwaymen and Huck complains about the futility of playing at gentlemen highway robbers.

“He (Tom) said if I warn’t so ignorant, but had read a book called ‘Don Quixote’, I would know without asking… So then I judged that all that stuff was only just one of Tom Sawyer’s lies. I reckoned he believed in all the A-rabs and the elephants, but for me I think different. It had all the marks of a Sunday school.”

Tom Sawyer’s self-conscious play demonstrated awareness of the rules of genre whether it is highwaymen or pirates. He makes the painting of his aunt’s fence into an event, although the event lacking any authentic emotional or artistic quality it is very profitable one for Tom. (Read more in my forth-coming book, Tom Sawyer, Art Entrepreneur. Syndicated chapter from the early years about Tom getting the local street artists to paint his Aunts fence for nothing, they even brought their own paint. But I digress.)

One can always have doubts about Tom Sawyer’s true intentions or have doubts about Duchamp – serious, joke or both? Tom Sawyer chooses to play at being pirates or highwaymen just as Duchamp chooses to play at making art. However whereas Tom Sawyer slavish follows the conventions of the genre, to Huck Finn’s great consternation, Duchamp incorporates jokes about them into his games. Jokes were about being aware of the conventions of the art gallery and the art world. Duchamp did not change the conventions of art galleries and the art world, the changes had already been made.

Isn’t a charlatan just the opposition’s view of a magician? (Are we talking stage magician or someone like Gandalf?) I am referring to Jed Perls’s new book Magicians and Charlatans. 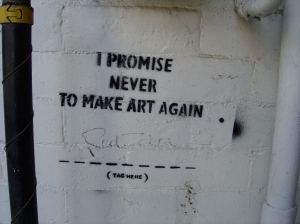