Moreland Road the division marks the division between Brunswick and Coburg. Coburg was once the breadbasket of colonial Melbourne with its rich fertile volcanic soil. Originally called Pentridge Coburg changed its name to disassociate itself from the prison that was its major landmark. To the west on Moreland Road is Moreland Station. The micro suburb of Moreland is no longer much of a feature.

29. Mores Street, there is a vacant patch in this area. The old “Hygienic Diary” is a reminder of Coburg’s past and the 7/11 the contemporary.

30. The Avenue, Kangan Institute’s Coburg Campus. The posh area of Coburg is in the roads off to the east. The division between the wealthy eastern side and poorer western side is typical of social organisation in Melbourne by compass directions. Woodlands Hotel that used to have its own horse racing track out the back. 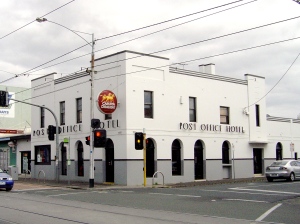 31. Reynard Street corner with the Post Office Hotel, the hotel is a lot older than its art deco facade. On the east side of the road there are is a new office block with an ALP Senator’s office. On the western side there is an Indian grocery, framers, Italian tailors making handmade suits and fish and chip shop.

32. With Harding Street going east and Munro Street going west. This is the start of the main Coburg shopping, transport and local government hub. The corner also sums up the whole of the Sydney Road shopping experience with bridal, Indian clothing stores, Islamic fashion and a few good places to eat. 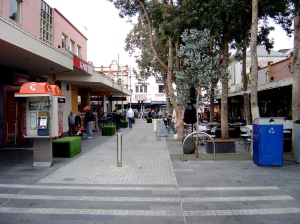 33. Victoria Street mall and the Coburg Market. Coburg Station is through the mall and across multiple car parks. The facades in the shopping strip date from the 1960s and the modern style is now looking old fashioned. The very thin silk fabric shop that has been there forever is closing down. Lots of banks, take-away food and discount shops.

34. Bell Street is the division between Coburg and Coburg North, another psychogeographical division in the rings around inner Melbourne. Bell Street is now a transport hub with bus stops and an entrance to the Coburg train station. On the opposite corner is a park with the Federation bicentenary pond in front of the church. Following the park there is line of churches next to the prison; it is a remanent of local council compromises with the multi-sectarian population that could not sustain all of them. This area creates a psychic barrier for the North of Coburg’s shopping centre. There is schizophrenic relationship between sides of the road; the western side looks like a slum with demolition work, whereas the eastern side looks more like Parkville, however over the following tram stops this process alternates back and forth. There is a lot of guerrilla gardening on the side streets to the west, the bike path is lined with flower gardens.

36. Rogers Street and the Drum Hotel; after this suburban houses start to appear along Sydney Road.

37. Gaffney Street; to the west is Batman Station and to the east the Coburg Lake Reserve. On the east side are shops selling blinds, catering equipment and on the west side there is an empty lot with flashing signs, tyre shop and the old Coburg Fire Station that now sells auto parts.

38. Carr Street and Renown Street; on the east side is Lake Park Kindergarten, Budget Motel and Car rental and on there are west side substantial two story brick houses.

39. Mercy College on the east side and the brick houses continue on the west side. Next there is pedestrian overpass followed by a the logical arrangement of funeral services next to an aged care home.

40.  The tram terminus stop at Bakers Road where the tramline ends with a new centre road stop. On the east side is a business selling blinds and the Salvation Army Divisional HQ. On the west side there is a vacant lot being turned into a garden, a bench has been installed and trees planted. The houses beside the road are now weatherboard. North of this the road continues with a motel and other auto related businesses, a clear indication that you are now entering car territory. 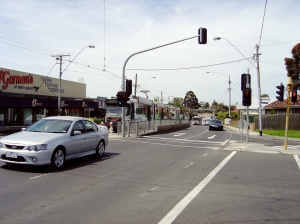