The immense, almost two metres long, polished, muscled torso turning at the waist, made of the white marble is Peter Schipperheyn’s most recent sculpture, River God. It refers back to figures one of the figures on the Parthenon’s tympanum (you know, that triangular bit filled with carved figures under the pitched roof). 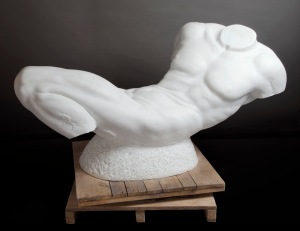 Peter Schipperheyn loves carving marble, particularly Carrara marble. Marble is a metamorphosed limestone, the crystals in the white stone is vary in size and occasionally mixed with tiny specks of mica. The white marble can be naturally stained with yellow with iron oxide or green with copper oxide. The block of marble is then under goes a second metamorphosis when it is carved.

Schipperheyn wants to be part of the marble carving tradition around Carrara. Marble has been quarried in Carrara since the Roman Empire. Quarrying and carving marble in Carrara is a tradition that might appear conservative but it also includes a tradition of anarchist radicals since the 19th century.

Peter Schipperheyn was first inspired by the large marble, stainless steel, silver bronze, nickel-plated steel sculpture in the NGV, Jean-Robert Ipoustéguy’s Death of the father (La Mort du père) 1967-1968. I always wondered what influence this macabre installation like an exploded medieval tomb of a bishop would have on Melbourne’s art. Schipperheyn understood the power and the instinctual desire to touch that that polished surfaces of Ipoustéguy’s sculpture generated. This desire to touch is expressed in several of Schipperheyn’s sculpture including Erotica, 2009.

Ipoustéguy had other resonances in Schipperheyn’s life. Eric Westbrook, the director of the NGV who had acquired Death of the Father also wrote a letter of reference for Peter that helped get his first trip to Italy where discovered his love for carving marble. Years later Schipperheyn managed to meet Ipoustéguy in Choise La Roi, on the outskirts of Paris.

I met Peter Schipperheyn at an exhibition of his ten of his recent works in marble and bronze at Mossgreen Gallery. Peter was wearing a bright orange linen suit and plain t-shirt. His marble carving tools, still with marble dust on them, are on exhibition in the built in vitrines at Mossgreen Gallery. He is happy and relaxed, he is on a hiatus after a lot of hard work, at the same time he is keen to get back to work.

Writer, independent researcher and artist, Mark Holsworth is the author of the book Sculptures of Melbourne. END_OF_DOCUMENT_TOKEN_TO_BE_REPLACED
This entry was posted on Wednesday, April 9th, 2014 at 12:35 PM and tagged with Armadale, Carrara marble, Jean-Robert Ipoustéguy, marble sculpture, Mossgreen Gallery, Peter Schipperheyn, sculpture and posted in Art Galleries & Exhibitions. You can follow any responses to this entry through the RSS 2.0 feed.
« Warehouse vs ARI
DAMP @ Neon Parc »