The new Junky Projects that is part of All Your Walls in Hosier Lane is the largest that I have yet seen on the streets, becoming more abstract in his compositions. It a Dadaists/Futurists.

The Lego men in also All Your Walls by Pop Cap. 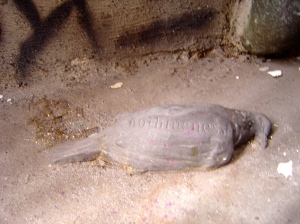 Will Coles, Nothingness, does anyone notice if a pigeon dies?

Photograph that Psalm sent to me, this urban Rainbow is some of some of his fine work. Showing that he can do installations and other street art. 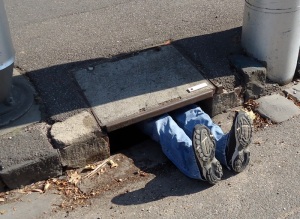 Another photograph by Psalm of his work, Drain, its an old gag but worth doing well.

A great serpent clown by GT in Blender Lane. 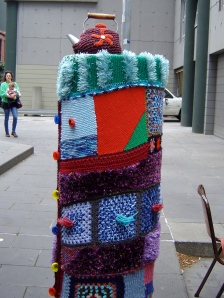 Yarn bombing referring back to the tea-cosy. Is yarn bombing trying to make the city more cosy?

A temporary installation; Les Futo’s great spiral of used lighters, presented at the Brunswick Festival in 2008.

Can fling-up be art? In 2009 these buckets appeared in AC/DC Lane. 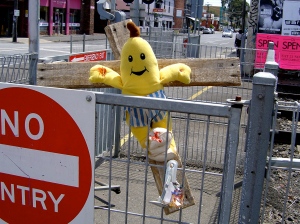 B1 Crucified in Brunswick in 2013. Is this a reference to cuts to the ABC?