On Gertrude Street the passing tram displays an advertisement on its side; the image of the street artist, Rone modelling for the fashion label Uniqlo. Now lets talk about mainstream and alternative culture or, at least, read Paul Harrison’s article “We are all sheep: what Uniqlo and H&M tell us about Australian retail”. 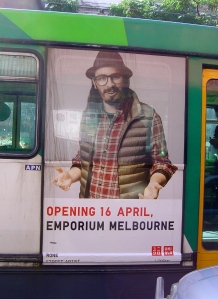 I can’t remember the last time that I wandered around Fitzroy and Collingwood looking at the streets, the street art and the art galleries. It has been over a year since I last reviewed a gallery in Fitzroy.

I used to regard the area around Gertrude Street and Brunswick Street the alternative cultural centre of Melbourne and although never a resident I used to be a frequent visitor. It has definitely been awhile, things have definitely changed but fortunately other things remain reassuringly familiar. I always pass a street artist up a ladder painting a wall on perambulations of Fitzroy or Collingwood.

Fitzroy is such a mix between the discount and the designer, between the socially vulnerable and affluent and between the mundane and the marvellous. A scruffy guy scuffs twice with his foot at a two dollar coin that some prankster had glued to the pavement and then moves on. How many different Fitzroys are there? 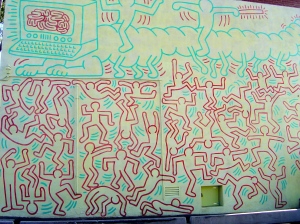 In Collingwood I was glad to see the Haring mural fully restored and complete with information panels for the public (although the little service hatch door is not the original). It is a major change since I first wrote about it on this blog.

On my walk I managed to see exhibitions. Fitzroy and Collingwood’s art scene of little galleries is another world.

Off the Kerb’s group exhibition of creatures provided enough focus for such a disparate group of artists. This was better than BSG ungainly hanging and mix around their group show, creating a something that was less than the sum of its parts. ‘Body Sex’ was the theme of BSG group show but Off the Kerb’s broader theme of ‘Creature’ made a more unified exhibition. Off the Kerb’s exhibition also had the benefit of Dan Dealy who curated the show. (More taxidermy art at Off the Kerb by Lucia Mocnay and Tul Suwannakit, see my earlier post on Contemporary Art and Taxidermy.)

Next door to Off the Kerb, at Fawn Gallery, ’Analogue Re-Mission’ by Tansy McNally is an exhibition of paintings based on digital television distortions that creates random abstract of the image. The translation of this source material into paint actually did work, like post-impressionism for the digital age.

At Seventh there was Travis John’s FaceSplitter Lauren McCartney’s The Hula Hooping Project and  is described as a “composition, performance and installation existing somewhere between destruction and creation”. It looks like something out of Mythbusters. McCartney had used ppaint filled hula hoops. I’ve seen this idea before executed better by No Mi Che’s Oroborus in 2007 as she could really spin a hula hoop and wasn’t afraid of being covered in paint. McCartney’s paint splattered ‘gallery two’ with the prints and impressions of the artists feet reminded me of the work of Japanese art movement, Gutai because of the expression of primal energy.

Writer, independent researcher and artist, Mark Holsworth is the author of the book Sculptures of Melbourne. END_OF_DOCUMENT_TOKEN_TO_BE_REPLACED
This entry was posted on Thursday, April 24th, 2014 at 10:19 PM and tagged with Collingwood, Fawn Gallery, Fitzroy, Keith Haring, Off the Kerb, Rone, Seventh and posted in Art Galleries & Exhibitions, Culture Notes, Street Art. You can follow any responses to this entry through the RSS 2.0 feed.
« Melbourne’s Weather
Psychogeography »